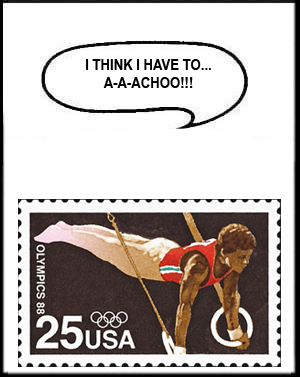 Linn's reader Thomas Rogers of Wisconsin is the winner of the June cartoon caption contest, which uses the 25¢ 1988 airmail stamp for the Seoul Olympic Summer Games. The next contest will be announced in Linn's Aug. 13 issue.

The fact that the Summer Olympics are in London this year inspired several entries in the June cartoon caption contest. The contest featured the 1988 25¢ stamp, in Figure 3, issued to publicize the Summer Games in Seoul, Korea.

Of these entries, my favorite mentions some of the best known British dishes — some excellent fare, and others less appetizing. It is from Merle Farrington of Medway, Massachusetts, and goes like this: "Bangers and mash, haggis, fish and chips... haven't had a decent meal since I got here!"

The second most popular subject was airmail; not a surprise when the gymnast is suspended in air, not unlike an airplane. An example of these entries is "Hope the airmail stamp adhesive is strong," from Diane Boyarsky of Princeton, N.J.

The philatelic line winner hits on several collector themes. It's from Tom Havens of Whiteland, Ind., and has the gymnast saying: "Ninety seconds into the routine and now for the serpentine cut, with a double watermark twist, and then stick the mint landing!"

Self control and iron discipline are the hallmarks of athletics at the highest level of competition. How often have you seen a gold medalist sneeze at the wrong moment? But the nonphilatelic line winner shown in Figure 3 breaks the rule. It is by Thomas Rogers of West Allis, Wis.

"They said I would never amount to anything if I spent all my time hanging around," from Michael Intenzo of Philadelphia, Pa.

"One slip up and I am a se-tenant!" by Bert McGann of Pennsylvania.

"Don't worry Mom...I've got original gum on my hands!" created by Boyd Degeest of Winona, Minn.

"Mom, I begged you to stop putting starch in my oatmeal!" from Wayne Cunkelman of Lady Lake, Fla.

"I came to the Olympics in South Korea hoping to find my Seoul-mate!" from Steve Kotler of San Francisco, Calif.

"To tell you the truth, I worry more about the 'fashion police' than the judges," sent by Thomas and Laura Tomaszek of Cedar Rapids, Iowa.

The next cartoon caption contest will be announced in the Aug. 13 Linn's.