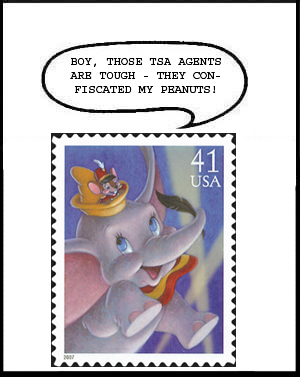 Thomas and Laura Tomaszek of Iowa, is the winner of the philatelic line portion of the March cartoon caption contest, featuring the 41¢ Dumbo and Timothy Mouse stamp from 2007. The next contest will be in Linn's by May 3, 2010 issue.

Wow! The March cartoon caption contest using the 41¢ Dumbo and Timothy Mouse stamp in Figure 3 from the 2007 The Art of Disney issue, brought out some vitriolic thoughts on both ends of the political spectrum. I suppose this should not be a surprise as the contest was in progress during the battle over the health care legislation recently signed into law.

Though some of the entries met the humor test for consideration, Linn's generally chooses to steer clear of partisan politics: just a word to the wise for future entries.

There were several semi-political entries playing off Dumbo being an elephant. For instance, Wade Saadi of Brooklyn, N.Y., sent in "Thanks Tom Nast. I'm off to a Grand Old Party!"

Nothing partisan about that – it is a fact of history that 19th century political cartoonist Thomas Nast created both of the animal icons that represent Republicans and Democrats.

If peanuts were used more often than any other subject in the entries for the Dumbo stamp, mice were a close second. Despite the presence on the stamp of Timothy Mouse in this design, many have come to believe that elephants are afraid of these comparatively small animals.

It is not true, but T. Ryan of Peekskill, N.Y., used the myth effectively with: "I want to collect 'computers on stamps,' but I'm scared to death of mice!"

The nonphilatelic line winner comes from a group of entries that were based on the difficulties of flying these days. Most cast Dumbo in the role of being able to avoid that problem, but Thomas and Laura Tomaszek of Cedar Rapids, Iowa, had a more unusual take with their Figure 3 entry.

On the philatelic side of the contest, Frank Varga of Toms River, N.J., wins the prize with this take-off on Timothy's exposed position: "Timmy, don't forget to duck as we go through the canceler!"

"Timothy, did you bring the first-flight covers?" from Dick Hall of Asheville, N.C.

"I only buy stamps with jumbo margins," sent in by Michael Intenzo from Philadelphia, Pa.

"What's huge and grey and flies? An elecopter!" from Jack Trammell of Mineral, Va.

"I think I landed that job on the Q-tips commercial!" by Steve Kotler of San Francisco, Calif.

The next cartoon caption contest will be announced in the May 3 Linn's.