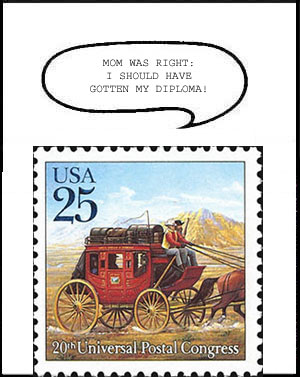 Tim Liljeberg of Brooklyn Park, MNN., used the 25¢ Stage-coach stamp to reflect on the benefit of edition for the winning the nonphilatelic-line entry for the May cartoon caption contest. The next context will be announced in Linn's July 7 issue.

A surprising number of readers responded to the May cartoon caption contest for the 25¢ Stagecoach stamp from 1989 shown in Figure 4.

Many entries likened the driver's view of the south end of the horse to their view of the presidential contest currently in progress. Good taste prevents me from presenting any of those entries.

The next most popular theme also centered on the horse, or rather the partial horse in the scene. Larry Jones of Bay City, Mich., saw it this way: "How can I move the mail with only half a horse?"

Given the rising costs to the Postal Service for transporting and delivering the mail, it was probably inevitable that contest entrants would make the connection between the good old days and today.

The situation on the stamp makes horsepower look pretty good, and James Yost from Middletown, Ohio, brings that home with, "I knew when gas got to be $4 a gallon, I'd get my old job back."

The winning nonphilatelic line, from Tim Liljeberg of Brooklyn Park, Minn., is shown in Figure 4. It plays off the often-heard parental advice about the value of education.

On the philatelic side, J.M. Kelly from Tucson, Ariz., has the messenger thinking in today's terms, with, "I think I'll file for Postal Traumatic Stress Syndrome."

"If that kid in the back seat asks one more time 'Are we there yet?' we're gonna leave him at the next rest stop!" from Ken Grothoff of O'Fallon, Mo.

"Dag-nabit, I'd swap my whole stamp collection for a seat cushion right about now!" from Jeff Smith of Vinalhaven, Maine.

"When I signed up for acting classes, this was not the type of 'stage coach' I was expecting!" by Steve Kotler from San Francisco, Calif.