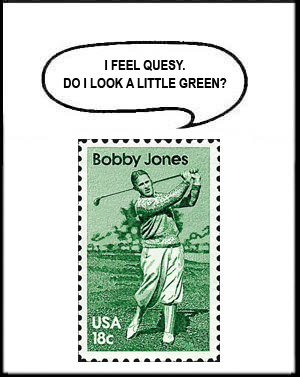 Linn's reader Scott Huffman of Texas is the winner of the May cartoon caption contest, which uses the 1981 18¢ Bobby Jones commemorative stamp. The next contest will be announced in Linn's July 9 issue.

The extraordinary golfer Bobby Jones (1902-71) is honored on the 1981 18¢ stamp shown in Figure 3, completing a swing, and the pose made it a perfect image for the May cartoon caption contest.

The most often used line was the simple

"Fore-ever," first sent in by Helen Parcells of Selbyville, Del. Another often-used theme was the matching up of the stamp value with the number of holes in a golf game. Mike Dornbrock from Cedar Falls, Iowa, suggested "I refuse to play golf at the rate of only a penny per hole!"

Stamp color does not often enter into entries in the cartoon contest, but this month is an exception. An anonymous entry has a TV reporter off-camera commenting, "Green with envy, Jones is about to try to match the hole-in-one just posted by the tournament leader."

This brings me to the nonphilatelic winner for this contest, shown in Figure 3, sent in by Scott Huffman of Dallas, Texas.

On the philatelic side, Bradley Miller from Huntsville, Ala., takes the prize with "I don't think the SPCA [Society for the Prevention of Cruelty to Animals] is going to like our newly-developed mail-carrier anti-canine nine iron."

"Dang it! Hit the ball into the selvage again!" from Mildred Barylski of Alexandria, Va.

"Oh where? Oh where has my golf ball gone? Oh were, oh where can it be?" by May Aginsky of Brooklyn, N.Y.

"Getting an ace is mighty good, and pars will keep me on track, but if I had my druthers, I'd wish for a Penny Black!" by Lawrence Segel of Valhalla, N.Y.

"Drive for show, putt for dough!" from Gordon Trotter of Columbia, Md.

"I forgot, golf is 'flog' spelled backwards!" from Lee Nelson of Michigan.

"Oh, no, not another twist in my knickers," sent by Richard Smith of Wilmington, Del.

"I've got the best of both worlds; I get to putter around indoors and out!" by Steve Kotler of San Francisco, Calif.

The next cartoon caption contest will be announced in the July 9 Linn's.