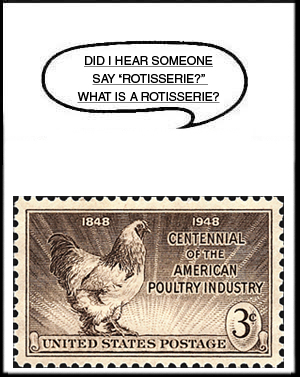 Linn's reader Donna Smith of Delaware is the winner of the November cartoon caption contest, which uses the 1948 3¢ Poultry Industry Centennial stamp. The next contest will be announced in Linn's Jan. 9 issue.

There were more duplicate entries for the November cartoon caption contest than for any other stamp in recent memory. The 1948 3¢ stamp in Figure 4 features a Brahma rooster as an emblem for the 100th anniversary of the American Poultry Industry.

Another distinction is that just one person caught my error in saying that this is the only U.S. stamp to show an egg. David Vikan of Dickinson, N.D. sent this entry: "Hotchner's not egg-zactly right. Mama Eagle has one on Scott 1387." He's right. The 6¢ Bald Eagle in this 1970 stamp is tending one unbroken egg and a newly hatched eaglet.

The favorite entry was "Eat more beef!" from a half dozen readers. I guess we are paying attention to those Chick-fil-A ads.

In second place was a play on the 3¢ denomination as chicken feed compared to today's prices. This example comes from an anonymous reader: "My value is chicken feed. Next year it will take 15 of me to pay the new first-class rate!"

Also a popular theme was the matter of living roosters on stamps. William Hyde of LaCrosse, Wis., sent in this excellent example: "According to the 1866 law banning living persons, I should have appeared plucked and ready for the oven!"

The philatelic-line winner is "Stamp collecting is my nest egg" — perhaps more wishful thinking than reality for most of us — by Robert Klass and Katy Globus of Sacramento, Calif.

On the nonphilatelic side, Donna Smith from Wilmington, Del., takes the prize with a bit of gallows humor, as shown in Figure 4.

"It may be dawn but I'm not crowing about the postal rate increases!" from Ronald Gigliotti of La Porte, Ind.

"I sure hate having to change to Daylight-Savings time!" by Ralph Wiltamuth of Los Angeles, Calif.

"The poultry business gets me egg-cited," from Thomas Misiewicz of Martinsburg, W.Va.

"Why did the mailman cross the road?" sent in by Steve Kotler of San Francisco, Calif.

The next cartoon caption contest will be announced in the Jan. 9 Linn's.