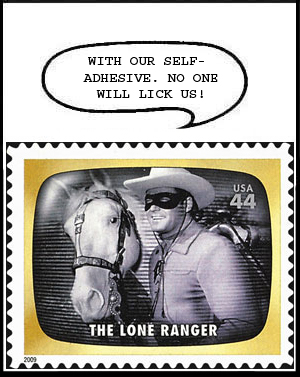 Michael Moticha provided the winning philatelic line for November's cartoon caption contest featuring the 44¢ Lone Ragner stamp. The next contest will be in Linn's by January 4, 2010 issue.

Tonto, the third member of the Lone Ranger's team, didn't make it onto the design for the 44¢ Lone Ranger stamp (Figure 3). This stamp from the Early Television Memories pane of 20 was used for the November cartoon caption contest.

Even though he isn't pictured, Tonto figured into many of the entries received. This example comes from Richard Novick of Marlboro, N.J.: "Silver, next time you see Tonto, tell him to stop bugging me with all those problems about bad guys. I hardly ever get time to work on my stamp collection!"

Did Silver, the Lone Ranger's horse, have pretensions of greatness beyond television? Many entries ruminated on the possibility. For example, "Sorry, Silver, you can't join the Pony Express. You're already under contract to MGM," was sent in by Sanford Greene of Elmhurst, N.Y.

In an attempt at gallows humor, I suppose, quite a few entries mused on uses for horses after their demise. Donna Smith of Wilmington, Del., suggested a label for the Early Television Memories pane saying, "Neither Silver nor any other horse was used in the manufacturing of glue for these stamps."

The nonphilatelic line winner was from John Leonard Jr., of Hatboro, Pa., who has the ranger asking: "What's that Silver? You say Timmy's in the well? – I think that's a different show!"

On the philatelic side, Michael Moticha of Apple Valley, Calif., takes the top prize with the entry in Figure 3 that links stamp technology with the show.

"You're right, Silver, this mask definitely works better when I cut eye holes in it!" by Bob Englander of Valencia, Calif.

"So, this horse walks into a bar . . ." by Gina Kaitlen of Mountain View, Calif.

Ted Harris of The Villages, Fla., took into account that the Lone Ranger was a radio star in the 1930s: "Well, Trigger, it looks like we made it through another season — and Jingles thinks I have early memory loss!"

"Need money for a new house and stables? This is a job for the Loan Ar-Ranger!" variations of which came from Aubrey Dunne of La Mesa, Calif., and Steve Kotler of San Francisco, Calif.

Thanks and a tip of the hat to all who entered. The next cartoon caption contest will be announced in the Jan. 4, 2010, Linn's.