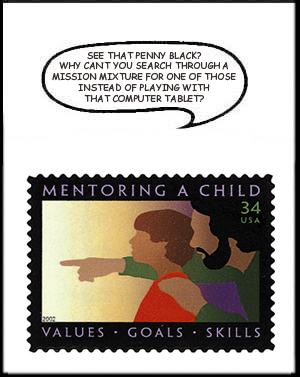 Linn's reader Lawrence Segel is the winner of the October cartoon caption contest, which uses the 2002 34¢ Mentoring a Child stamp. The next contest will be announced in Linn's Dec. 12 issue.

Time marches on. I have been running the cartoon caption contest in the U.S. Notes column since 1986. Most contests have drawn between 50 and 200 entries, but the last couple of years have seen a gradual decrease in entries. The current contest using the 34¢ Mentoring a Child stamp, shown in Figure 4, brought in just 33 entries from 21 readers.

That is barely enough from which to select winners after the too long entries, the too profound, the difficult to understand, and the (usually intentionally) politically incorrect entries are subtracted.

For the Mentoring a Child stamp, there was one predominating theme: prospectively mourning the closing of post offices, as proposed by the United States Postal Service. A good example is, "See that taco stand? It used to be our post office," submitted by David Torres of San Angelo, Texas.

In the same vein is this entry from Ron Culler of Peru, Ind.: "The museum sign says it's a stamp. It was put on something called an envelope and used to carry messages from one person to another."

There were so few non-philatelic entries I am going to pick only a philatelic winner this time. Shown in Figure 4, the winner is Lawrence Segel of Valhalla, N.Y., who highlights one of philately's major competitors for the attention of youth collectors.

Segel will receive Linn's Stamp Identifier published by Amos Hobby Publishing, or a 13-week subscription toLinn's (a new subscription or an extension). The book has a retail value of $12.99. Here are a few of the runners-up:

"Keep looking and you might find an inverted stamp to pay for your college tuition," by Paul Dunn from Painesville, Ohio.

"If you look hard, son, you will see another postage increase on its way." by Frank Varga of Tom's River, N.J.

"That's not an invert. He just mounted the stamp upside down," by Michael Intenzo from Philadelphia, Pa.

The next cartoon caption contest will be announced in the Dec. 12 Linn's.