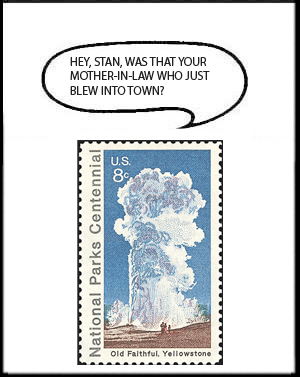 Melody Foster of Minneapolis, Minn., wins the October cartoon caption contest. The next contest will be announced in Linn's December 27 issue.

Old Faithful in Yellowstone National Park is featured on the 8¢ National Parks Centennial issue of 1972. It was selected as the cartoon caption contest stamp for October to give readers a chance to suggest their thoughts if they were part of the three-person family looking up at the 185-foot geyser of boiling water and steam.

The stamp is shown in Figure 3.

Many saw the geyser as the possible answer to their prayers about how to deal with U.S. self-adhesive stamps that won't soak free of envelope paper.

Among the most creative of this group is this entry from Mike Lantz of Niles, Ohio: "This is where I soak my self-sticks. By the time they land, they're dry!"

Ron Cullers from Peru, Ind., entered just before the Postal Rate Commission turned down the proposed rate increase that was to take effect in January. He says, "A postal rate increase in 2011 ... that really has me steamed!"

Taking his cue from some of the more heated contributions to Linn's Readers' Opinions page — including those from collectors stuggling with U.S. self-adhesives — Pete Johnson of Eastford, Conn., is the philatelic line contest-winner with "I've been erupting almost as long as the average Linn's reader!"

On the nonphilatelic side, which I must say dominated the entries this time, Melody Foster from Minneapolis, Minn., takes the prize with a bit of free association, as shown in Figure 3.

"Did you remember to turn off the..." by John Kachmarik of Rossford, Ohio.

"Now, is it just me, or does anyone else have to go?" sent by Lee McWhinney of Wall, Pa.

"Who dropped the Mentos in my Diet Coke?" by Steve Kotler from San Francisco, Calif.

"All this water and not a drop to drink," sent in by Stephen Pike of West Lebanon, N.H.

"How many times did I tell you, 'Call the plumber before it gets worse!'?" by Wm. David Webb of Rydal, Pa.

The next cartoon caption contest will be announced in the Dec. 27 Linn's.