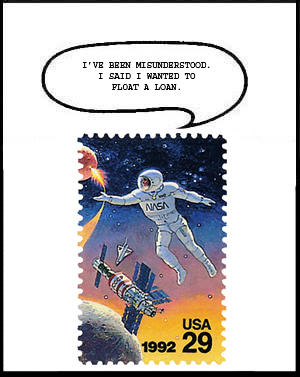 Gorden Dekarz won the nonphilatelic line portion of the October cartoon caption contest featuring a 29¢ Space Accomplishments stamp. The next contest will be in Linn's by December 7 issue.

Television seems to have served as a primary inspiration for those who entered the October cartoon caption contest, featuring the stamp in Figure 2, from the 1992 29¢ Space Accomplishments set of four.

Loretta Lincicome of Zanesville, Ohio, represents a group of entries that uses the tag line from a ubiquitous cell phone commercial as the spaceman's question: "Can you hear me now?"

Fred Nash of St. George, Utah, drafts off a current TV program with: "Unbelievable! I made it to the finale ofDancing with the Stars!"

The next most popular theme is derived from various aspects of postal operations. Representing this group is "You can only use self-adhesive stamps up here!" by Boyd DeGeest of Winona, Minn.

The philatelic line winner also comes from this group: "Looks like we're going to need a new group of ZIP codes for this new delivery zone!" by Arthur Ricardson from Swampscott, Mass.

On the nonphilatelic side, Gordon Dekarz of Stockton, Calif., wins with the line shown in Figure 2.

"Tetherless, Bob confronted his greatest fear – that of becoming a space filler," by Scott Huffman of Dallas, Texas.

"What do you mean: correct change only?" by John Trammel from Mineral, Va.

"Wow – the kitchen sink really is up here!" sent by Clyde Riggle of Hamilton, Mont.

"That's not a rocket – it's the global financial market," from Michael V. Intenzo of Philadelphia, Pa.

"I can see Russia and Alaska from up here!" by Wolf Berry of Hornell, N.Y.

"Why do I always get stuck taking out the garbage?" from Steve Kotler of San Francisco, Calif.

The next cartoon caption contest will be announced in the Dec. 7 Linn's.