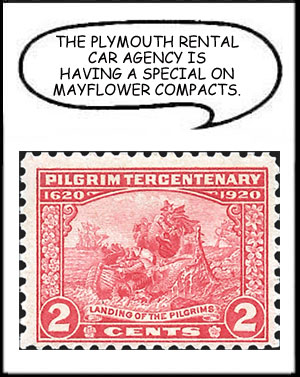 Steve Kotler of California is one of two winners in the October cartoon caption contest. The stamp is the 2¢ Pilgrim Tercentenary issue of 1920, showing the landing of the Pilgrims at Plymouth Rock. The next contest will be announced in Linn's Dec. 9 issue.

The 2¢ Pilgrim Tercentenary stamp in Figure 4 shows "The Landing of the Pilgrims" but as one entry in the October cartoon caption contest noted, the image does not represent the high-water mark of U.S. stamp design. The central design is not as clear as it might be, and the color does not help to bring it out. Still, there were many good entries.

As I write this column the Boston Red Sox have just taken game six of the World Series to win it all, beating the St. Louis Cardinals. Not all of Linn's readers will be happy about this, but some of the contest entries predicted the outcome, an example being, "I hope we get there in time to see the Red Sox win the series," by Lawrence Segel of Valhalla, N.Y.

What else were the Pilgrims expecting to find? Scott Cassie of Westfield, N.J., answers that question with, "So, where's the nearest Starbucks?"

Another major theme was the state of the ship's company on landing. Edgar Dunlap of Gainesville, Ga., addresses this with, "First things first. Everyone take a bath!"

Every schoolchild in the United States is taught that the Pilgrims landed at Plymouth Rock, which the stamp design shows. That provided the backdrop for a nonphilatelic line winner: "Let's build a bistro here! We'll call it the Plymouth Hard-Rock Cafe!" sent in by Dan Moran of Williamsburg, Va.

There were few entries on the philatelic side and none up to the standard of a contest winner, so the second of our two prizes goes to Steve Kotler of San Francisco, Calif., whose clever entry is shown in Figure 4.

winners will receive Linn's Stamp Identifier published by Amos Hobby Publishing, or a 13-week subscription to Linn's(a new subscription or an extension). The book has a retail value of $12.99.

"My 2¢ worth? I doubt this land will ever amount to much," by Reid Hinson from Kill Devil Hills, N.C.

"Don't unpack yet. We've landed between a Rock and a hard place," by Joel Meyerson from Annandale, Va.

The next cartoon caption contest will be announced in the Dec. 9 Linn's.