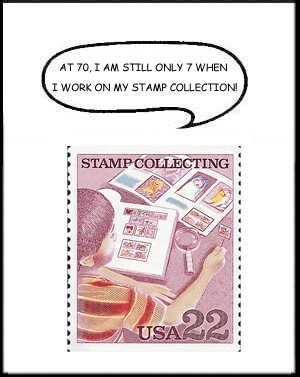 Edwin Lugowski Jr. of Lansing, Ill., is one of the two winners of the December U.S. Notes cartoon caption contest. The next contest will be announced in Linn's Feb. 11 issue.

Stamp collecting was celebrated on a booklet pane of four stamps issued in 1986 to promote the Ameripex international stamp show in Chicago, Ill.

The stamp pictured in Figure 3 from that booklet pane was the cartoon caption contest stamp for December.

Considering the subject of the contest stamp, it's not surprising that all of the entries were philatelic in nature.

Michael Blankenship of Frederick, Md., offered this caption entry: "So this is what old people did for fun before computers and video games!"

Robert Pyznar of Burlington, Pa., had this view of how today's youngsters might look at stamps: "No fooling Grandpa, did people really have to paste these pictures on an envelope to mail a letter?"

Nina Jackson of Culver City, Calif., gets right to the point with: "Grandpa, what are these for?"

An entry sent by Wes Heacock of Port Angeles, Wash., used the opportunity to tell a story on himself. He has the young collector saying, "My dad has four of each stamp — I'll just tear off one from my album page. He won't miss it." Of course, what Heacock did was tear up his father's plate blocks.

Because there were no nonphilatelic entries, the two winners selected this month are both philatelic in nature.

The first, shown in Figure 3, is more a commentary than the usual clever play-on-words. It comes from Edwin Lugowski Jr. of Lansing, Ill.

The second winner was submitted by Lawrence Segel of Valhalla, N.Y.: "Learning history and geography — this is way more fun than at school!"

Both will receive Linn's Stamp Identifier published by Amos Hobby Publishing, or a 13-week subscription to Linn's(a new subscription or an extension). The book has a retail value of $12.99. Here are a few of the runners-up:

"Falkland Islands: Dad, is it a perfin or a puffin?" from Stephen Rae of Napa, Calif.

"I can't believe that kid traded me all this for that lousy magenta stamp from British Guiana with the corners cut off!" by Brian McClay from San Jose, Calif.

The next cartoon caption contest will be announced in the Feb. 11 Linn's.