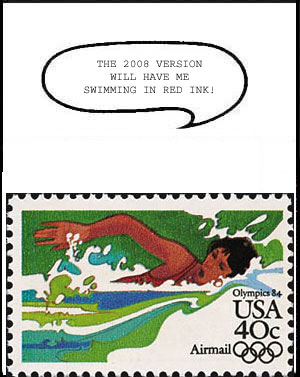 George R. Jacobs is the philatelic line winner for the October cartoon caption contest, using the 40¢ Olympic Swimmer stamp from 1983. The next contest will appear in Linn's Dec. 1 issue.

The 1983 40¢ Olympic Swimmer stamp shown in Figure 4 was used as the October cartoon caption contest stamp with the intention of inspiring comments that might be seriously attributable to 2008 Olympic multiple medalist Michael Phelps. But the entries did not, for the most part, turn out that way.

The thought that came up most often, however, did refer to the fact that Phelps won one of his races by 1/100 of a second – literally the length of a fingernail. Steve Zarko of Flat Rock, N.C., memorialized this with: "Sure am glad that airport security took my nail clipper!"

Michael Moticha of Apple Valley, Calif., waxed rhapsodic with the following poem supposedly from the lips of the champion: "With the length of a nail, I won the race, and brought gloom and doom to a manicurist's face."

Another concept that appeared regularly among the entries was expressed by Jack Simon from Rego Park, N.Y.: "I've got some commems in my trunks. The chlorine in the water will soak them off for sure." Lots of readers thought that would be a dandy idea.

Next in popularity was the idea that we might have discovered a new way to enable mail delivery. "I don't think delivering mail this way will ever catch on!" came from Stephen Dion of Raynham, Mass.

The philatelic line winner is George R. Jacobs of South Thomaston, Maine, who applied the design to today's financial situation and has the swimmer saying the line in Figure 4. An honorable mention goes to Saul Singer of Silver Spring, Md., who came up with another version of this thought: "Unlike the U.S. Postal Service, I'm swimming in green ink!"

On the nonphilatelic side, the winner's laurel goes to Dennis Ashcroft, of Gallup, N.M., for "I thought they said they were going to fly me to China!"

"I'll sure be glad when France reopens it philatelic sales office in London" from Ivan Pfalser of Caney, Kan.

"How on Earth did I ever end up on an airmail stamp?" by Ron DeHaas of Owasso, Mont.

"Mark Spitz? Who's that?" sent by Edward Payton of Bonita Springs, Fla.

"At $1,000 an ounce, my gold medals should help pay for that uncut press sheet I've been wanting" from William Ouellette of Rapid City, S.D.