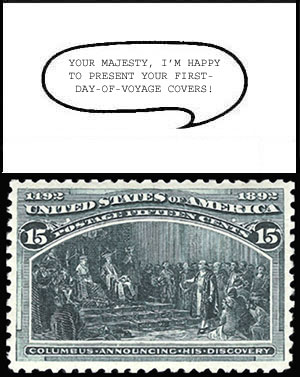 William Harris of Pennsylvania won the philatelic part of the Steptember cartoon caption contest, putting words into the mouth of Columbus on the 1893 15¢ Columbian Exposition series stamp (Scott 238). The next contest will appear in Linn's Nov. 3 issue.

If Christopher Columbus had been able to accurately predict the future, several of the entrants in the cartoon caption contest, featuring the 15¢ stamp of the 1893 Columbian Exposition series (Scott 238), would have been right on target with their entries. Predictions by Columbus made up the largest number of entries.

A nice example is this one by William MacQuarrie of Omaha, Neb.: "And there'll be many places named in my honor, but none for your Majesties. So there!"

Getting more philatelic, Richard Novick from Marlboro, N.J., has Columbus saying: "Your majesty, I understand that a set of 16 stamps will be issued in my honor, and I will be shown on 14 of the stamps, while you will be shown on only seven."

Stephen Knowlton from Camp Hill, Pa., makes it more simple with "Everyone smile, we're going to be on a stamp."

The next level of comments had to do with the presentation of tobacco. Chris Faure from Averill Park, N.Y., caught this theme with "Now, inhale – not too hard . . . " while under his breath Columbus is saying, "He's going to be coughing for a week!"

Picking the winners was difficult because there were a lot of excellent lines, but William Harris from Bethlehem, Pa., takes the philatelic prize with the line shown in Figure 4.

Both winners will receive Linn's U.S. Stamp Facts 19th Century published by Amos Press, or a 13-week subscription to Linn's. The book has a retail value of $14.95. Here are a few of the runners-up:

"Yes, your majesty – I did sail with four ships, but one of them fell off . . ." by Alan Oberwager from Westbury, N.Y.

"Great news, your majesties! I've found a post office that has the Flags of our Nation coils!" sent by someone from Williamsport, Pa.