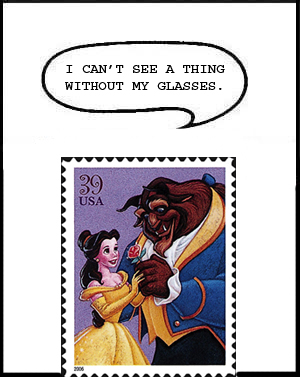 Steve Kotler of California was one of the winners of the September cartoon catpion contest, providing this line from the beautiful Belle on the 39¢ Beauty and the Beast stamp of 2006. The next contest will be in Linn's by November 2 issue.

The Disney connection inspired several entries, with a clever entry from Michael Intenzo of Philadelphia, Pa., who has the beast saying, "Why don't we go check out Walt's collection of cinderellas?"

Another consistent theme was the physical attributes of the beast. The beautiful Belle, according to Jerry Sheffield of Lavalette, W.Va., poses this question about the beast's philatelic abilities: "How can you sort such small stamps with such big paws?"

How the beast got into this fix was the subject of several entries. Stephen Dion of Rayham, Mass., suggests a possible answer with, "I warned you about licking those peel-and-stick stamps!"

With this contest I promised a prize for the best beast line and the best line for Belle. There were more entries with beastly lines than beauty lines, but there were quite a number where either character could be the speaker.

One of these I liked so much that I am awarding a third prize this time. This comes from William David Webb of Rydal, Pa.: "So, it's fixed – Thanksgiving with your folks, Christmas at mine."

It was tough to pick the others, but the top line for Belle explains all, as shown in Figure 3. This line was from Steve Kotler of San Francisco, Calif.

The other winner is from Frank Varga Sr. of Toms River, N.J., who has the beast saying, "Let's get hinges – oops, my mind's on stamps. I meant hitched!"

All three winners will receive Linn's Stamp Identifier published by Amos Hobby Publishing, or a 13-week subscription to Linn's (a new subscription or an extension). The book has a retail value of $12.99. Here are a few of the runners-up:

"The dentist was right – white fangs have improved my social life!" by Scott Huffman of Dallas, Texas.

"Mr. Beast, did you really get this acting job through Monster.com?" by Tim Ryan of Peekskill, N.Y.

"You can't fool me, beast, I'd know that breath anywhere!" sent by Jo-An Watson of Kalamazoo, Mich.

"It's a deal. I swap this magic rose for your set of Zepps," from Michael Lenard of Wausau, Wis.

"This stamp is a beauty, but the 39¢ cost is beastly," by Mike Dornbrock from Cedar Falls, Iowa.

"Roses are red; violets are purple. I love you more than maple syrple!" from Phil Echandi of Omaha, Neb.

The next cartoon caption contest will be announced in the Nov. 2 Linn's.