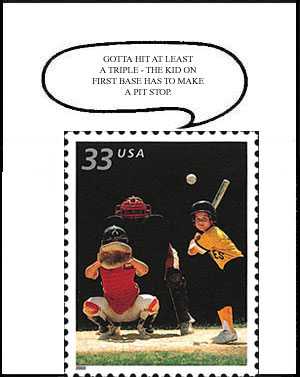 Jack Standen of Elyria, Ohio, provides this winning cartoon caption entry for the batter on this 33¢ Youth Baseball stamp. The next context will be announced in Linn's April 7 issue.

I actually ended up with three categories of entries, with the third being lines that could be said by either player. Several readers came up with some variation of this line from James Cope of Hamilton Square, N.J.: "May as well play baseball – Can't soak stamps anymore!"

Another contemporary, though nonphilatelic, news theme was used by Mary Yahr of West Bend, Wis., who has the characters saying, "We don't need writers to produce hits here!"

From those who tried to put words in the catcher's mouth, the prevailing method was to have him try to rattle the hitter with insult. The best of these lines is "Hey batter – your upside down airmail is a forgery!" from Sid Morginstin of Bordentown, N.J. This is the winner of the catcher category.

For the batter's category, the winner is Jack Standen of Elyria, Ohio, whose entry is featured in Figure 4.

"Hope he strikes out soon; my knees hurt!" by Merle Farrington from Medway, Mass.

"If the runner on third tries to come home, he's going to find a perfectly centered plate block," sent by David Vikan of Wells Fargo, N.D.

"I'll show you what 'socked on the nose' means," by Ken Bonvallet from Westerville, Ohio.

"Thirty-three homers and counting!" from Jan Cupido of Fresno, Calif.