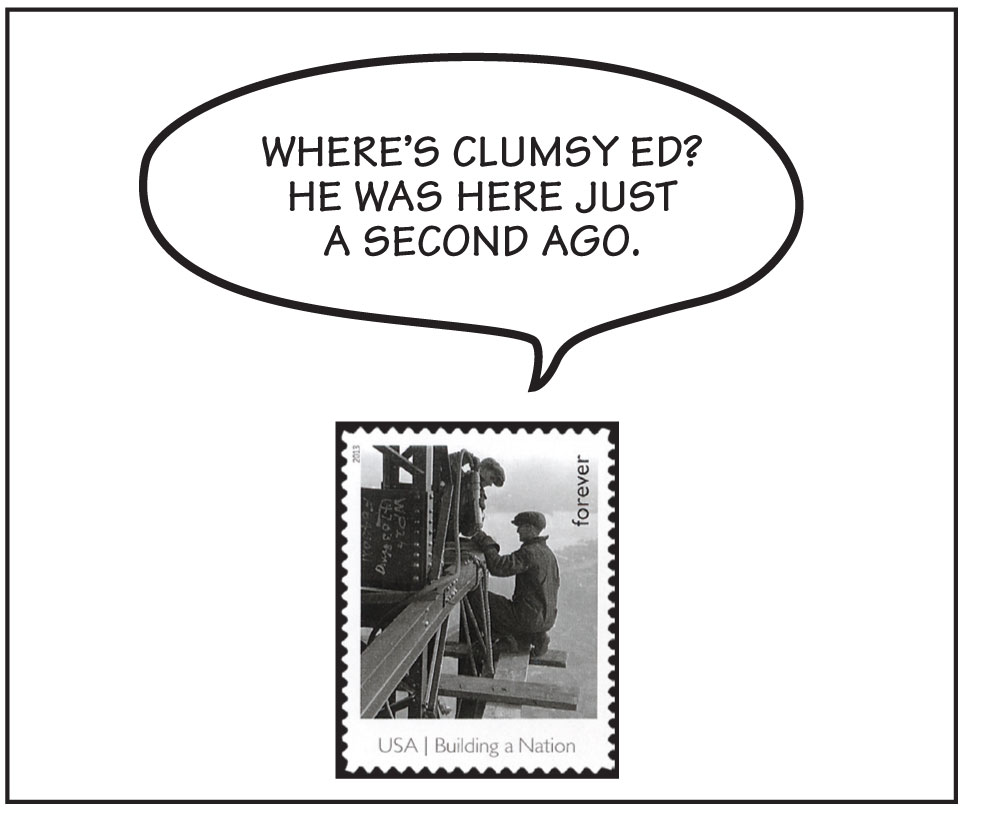 Jack Leonard of Hatboro, Pa., wins with dark humor the nonphilatelic part of the August cartoon caption contest featuring the 2013 Building A Nation stamp showing a black-and-white photograph of riveters working on one of the higher floor frames of the Em

Several other people sent similar lines, and they resonate with me. I was recently on the 57th floor roof of the amazing Marina Bay Sands Hotel in Singapore, and while perfectly safe, I still found the experience unsettling.

How workers perform on girders at that height is something I will never understand.

Another popular theme found on entries in the cartoon caption contest references the 1933 movie King Kong, in which the giant gorilla scales the Empire State Building.

Steve Kotler of San Francisco, Calif., recalls that image with, “I heard our foreman is just a big ape!”

Terry Jordan of Potomac Falls, Va., approached the subject from a different angle, with the steelworker saying, “I feel like King Kong up here, but where is that pretty woman?”

Nonphilatelic entries predominated in this contest. Jack Leonard of Hatboro, Pa., went for macabre humor with the winning line.

On the philatelic side, the winner is Steven Cole of Dove Creek, Colo., with the riveter saying, “Oops, rain! I wonder if I’m self-adhesive or lick-and-stick?”

“When I said I’d deliver airmail, this is not what I had in mind,” by Mitchell Zais of Columbia, S.C.

“So, I told my Dad one day I’d move up in the world,” from Terry Meier of Tampa, Fla.

“This is the last set of monkey bars I’m putting together!” sent by David D’Hondt of Sun City, Calif.

“60,000 feet up in a jet fighter didn’t bother me a bit, but looking at this stamp gives me the jitters,” by Lawrence Segel of White Plains, N.Y.

“Hang out far enough and you can catch a ‘Jenny,’” by Robert Bialo of Cary, Ill.

“This job is certainly riveting, but I’m up in the air about doing it full time,” from Edgar Dunlap, sent by e-mail.

The next cartoon caption contest will be announced in the Oct. 12 issue of Linn’s.