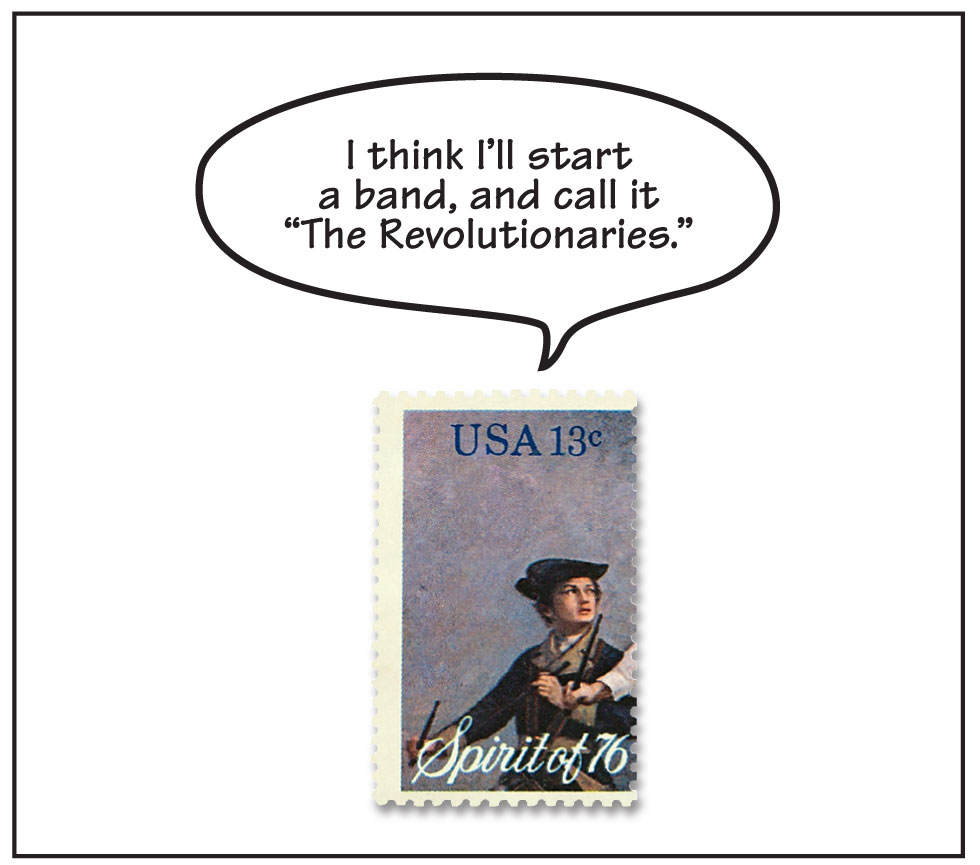 How much training does it take to be a drummer? At the level of proficiency represented by the young drummer on the 13¢ Drummer Boy stamp (Scott 1629) from The Spirit of ‘76 American Bicentennial set issued Jan. 1, 1976, probably not a lot.

Several entries in the July 2015 cartoon caption contest using this stamp presumed a short learning curve, and made a connection to the all-American bird while they were at it.

A good example is the entry from Dolores Chiaramonte of Valley Stream, N.Y., “They handed me these drumsticks, when all I asked for was the part of the turkey I liked best!”

Another popular theme was the British Invasion; no, not from hundreds of years ago, but rather the invasion of British musical groups in the 1960s and their colorful drummers.

David Vikan of Dickinson, N.D., addressed this with, “This is only a temporary gig for me. Pete Best has left the Beatles and I’m going to take his place. I’m going to be a Starr!”

With all of the odd names for musical groups, Jerry Login of New York, N.Y., came up with one that I’m surprised has not been taken. This was the winning entry for the nonphilatelic part of our contest.

On the philatelic side, the winner is Gary Martin of Joliet, Ill., with a line we can all get behind, “I’m trying to drum up some new ways to get youngsters interested in stamp collecting.”

“Dad, I told you they were going to separate us,” by Stephen Banks of Sacramento, Calif.

“Are we THERE yet?” sent by John Hostetter of Lancaster, Pa.

“If I make enough noise, will the British leave without a fight?” from Lawrence Segel of White Plains, N.Y.

The next cartoon caption contest will be announced in the Sept. 14 Linn’s.