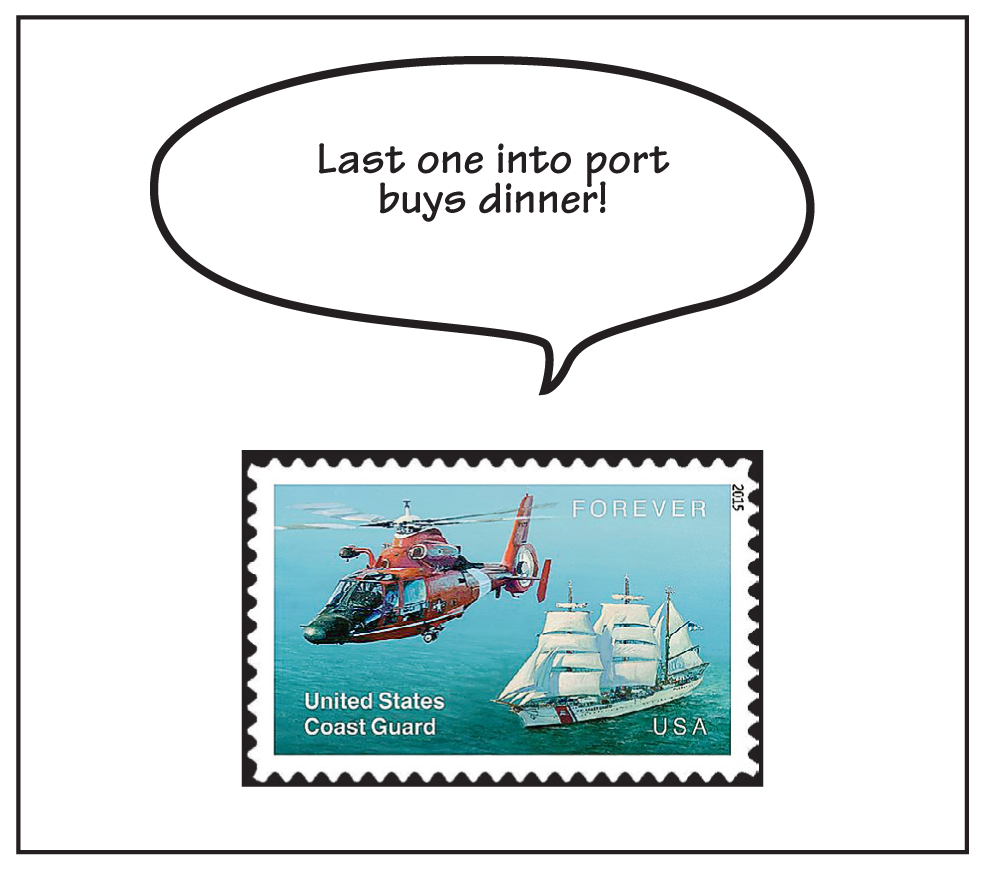 The Dolphin pilot’s chuckle can almost be heard behind his bet proposal by Harry C. Miller Jr. of Summit Hill, Pa., who wins the nonphilatelic part of the September cartoon caption contest featuring the 2015 commemorative honoring the U.S. Coast Guard, showing the training ship Eagle and a Dolphin helicopter. The next cartoon caption contest will be announced in Linn’s Nov. 9 issue.

Frustration was the dominant theme in the entries for the September cartoon caption contest featuring the U.S. Coast Guard stamp issued Aug. 4.

The stamp shows the Coast Guard training ship Eagle and a helicopter emblematic of one of the Coast Guard’s missions to rescue victims of maritime accidents and severe weather.

I asked Linn’s readers to put themselves in the helicopter pilot’s seat, and several had versions of the same thought, represented by William Kriebel of Philadelphia, Pa., who proposed, “Beautiful ship, but there’s no landing pad!”

A second popular theme played off the name of the ship and the helicopter designation. It is called a Dolphin.

From Terry Jordan of Potomac Falls, Va., comes, “A dolphin in the air, and an eagle in the water. Now who’s inverted?”

Many of the entries had to do with the relative speed of ship versus helicopter. From this group comes the tongue-in-cheek nonphilatelic line winner sent in by Harry C. Miller Jr. of Summit Hill, Pa.

On the philatelic side, the winners are Doug and Mildred Barylski of Alexandria, Va., who had the pilot complaining, “Sheesh! I had to fly all the way out here just to drop off the captain’s issue of Linn’s!”

“If you crossed a postmaster with the ship’s captain, would you get a postal cost guard cutter pair?” from Steve Kotler of San Francisco, Calif.

“Is that Canada’s Blue Nose I just spotted?” from Ron W. Smith of Providence, Utah.

“Dolphin to Eagle, Reverse course fast, or you’ll sail off the edge,” by David Schwartz, of Commack, N.Y.

The next cartoon caption contest will be announced in the Nov. 9 issue of Linn’s.