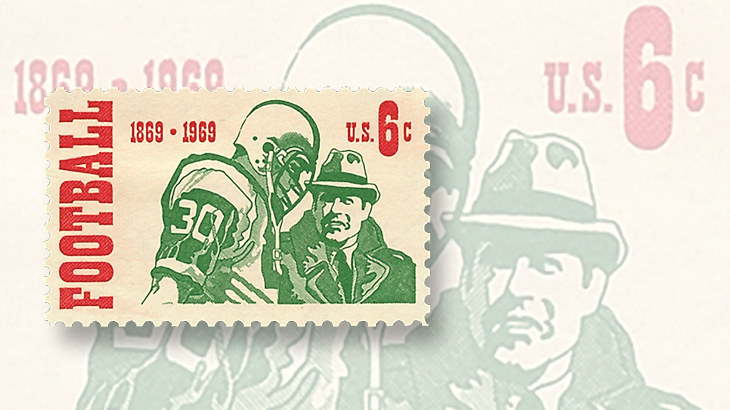 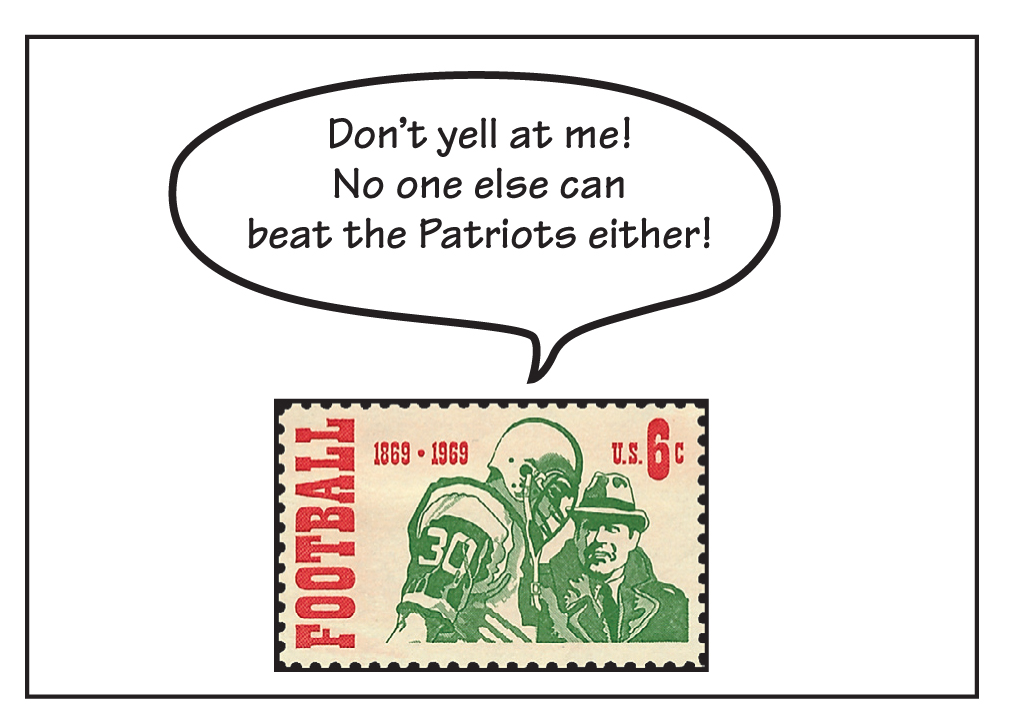 Frustration on the part of the player and the coach, as shown on this winning entry using the 1969 6¢ Intercollegiate Football commemorative, likely mirrors reality in professional football. The October cartoon caption contest winning entry for the best line by a player is from Lawrence Segel of White Plains, N.Y. The next cartoon caption contest will be announced in Linn’s Dec. 14 issue.
Previous
Next

The coach and the player sharing thoughts on the United States 1969 6¢ Intercollegiate Football stamp got many readers thinking in terms of philatelic parallels for the October cartoon caption contest.

Of these entries, one stood out for the number of stamp-collecting terms used. It was sent by Warren Rooney of Bakersfield, Calif.: “Coach says, ‘Listen kid, defense is the key; we’ll perforate their line, gum up their running game, block their passes, and make their entire offense faulty so their whole game gets unhinged!’ ”

Several readers came up with a line that reflects on a legend who is fading into history, “Who the heck is The Gipper?” The first such entry received was from Terry Harrison of Anaheim, Calif.

Several entries related to the deflated-football controversy nicknamed “Deflategate.” A good example is: “Don’t you think that 6¢ postage is a little overinflated?” by William Tuttle of Cleveland, Ohio.

The player prize was sent by Lawrence Segel of White Plains, N.Y.

The coach prize was won by Don Morris Jr. of Lapeer, Mich., who has the coach speaking to what seems to be a downcast player: “Instead of football, you should consider stamp collecting.”

“Get ready! I’m gonna flash a picture of the Penny Magenta on the scoreboard to distract them,” by Richard Hunt of Yellow Springs, Ohio.

“Quarterback, halfback, fullback … Coach, I told you I don’t do fractions!” from J.M. Kelly of Tucson, Ariz.

“Coach, I’ll never get a field goal as long as that girl Lucy keeps pulling the ball away!” sent by David Schwartz of Commack, N.Y.

“Coach to player: ‘Throw one more interception and your backup will be the one on this stamp!’” by Richard Kaplan of Metuchen, N.J.

“Great call coach! You have a sixth sense (6 cents) about their defense,” sent by Bradley Miller of Huntsville, Ala.

The next cartoon caption contest will be announced in the Dec. 14 issue of Linn’s.