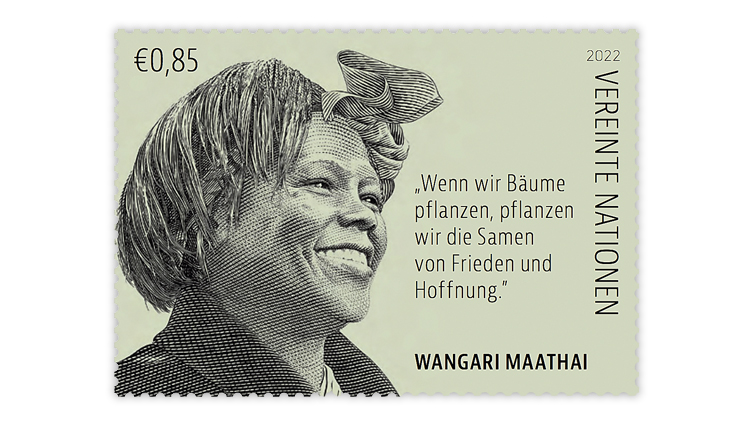 On April 1, the United Nations Postal Administration will honor Wangari Maathai, the first African woman to receive the Nobel Peace Prize, on a €0.85 definitive stamp for use from the post office at the Vienna International Center in Vienna, Austria.

Maathai, a Kenyan scholar and environmental activist, served in the Parliament of Kenya and was the first African woman to win the Nobel Peace Prize.

The €0.85 Wangari Maathai stamp is for use from the post office at the Vienna International Center in Vienna, Austria.

“Over many decades, Wangari Maathai actively contributed to furthering the ideals and goals of the United Nations,” the UNPA said in the latest issue (No. 137) of Fascination, its bulletin for collectors. “A globally recognized champion of human rights and women’s empowerment, Ms. Maathai was a pioneer in articulating the links between human rights, poverty, environmental protection and security.”

This stamp’s issue date coincides with the birth anniversary of Maathai, who was born April 1, 1940, to farmers in the highlands of Mount Kenya.

Maathai learned English in primary school and attended two colleges in the United States. She earned her bachelor’s degree at Mount St. Scholastica College (now Benedictine College) in Atchison, Kan., and her master’s degree at the University of Pittsburgh.

She obtained a doctoral degree in veterinary anatomy from the University of Nairobi in Kenya. According to the UNPA, she was the first woman in east and central Africa to earn a doctoral degree.

In 1977, she was appointed associate professor of veterinary anatomy at the University of Nairobi. She also founded the Green Belt Movement during that year.

In 2002, Maathai successfully campaigned for parliament in Kenya, and she served as assistant minister in the Ministry for Environment and Natural Resources until 2005. She won the 2004 Nobel Peace Prize for her “contribution to sustainable development, democracy and peace,” according to the Nobel Foundation.

In 2009, then-U.N. Secretary-General Ban Ki-moon named Maathai a U.N. messenger of peace with a special focus on environment and climate change. According to the United Nations, messengers of peace are widely recognized individuals who work to help expand worldwide awareness and understanding of the ideals and activities of the United Nations.

Other U.N. messengers for peace include Jane Goodall, Leonardo DiCaprio and Princess Haya bint Hussein. Maathai served as a messenger of peace until her death in 2011.

The stamp features an engraved-style portrait of Maathai.

A quote appears in German to the right of the portrait. The English translation is “When we plant trees, we plant the seeds of peace and hope.”

The Wangari Maathai stamp measures 50 millimeters by 35mm and is perforated gauge 14 by 14¼.