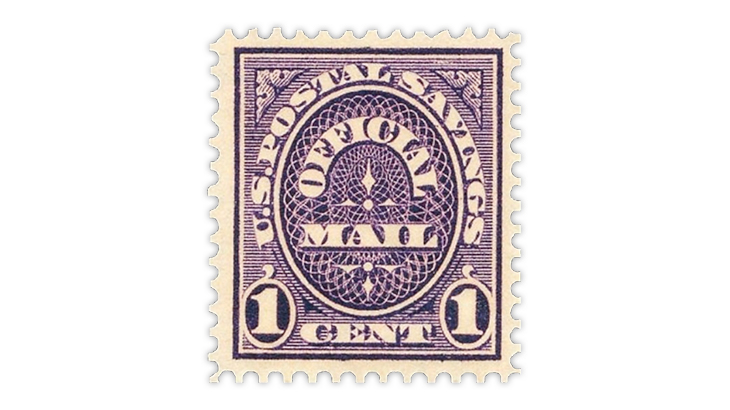 Postal savings depositories were established by an act of Congress approved June 25, 1910. Under this act, the U.S. Post Office Department created a savings bank system that paid 2 percent interest annually on deposits.

Until 1933 the postal savings bank had an advantage over other banks in not being vulnerable to bank runs. In 1933  the federal government insured all deposits of all banks up to $250,000, ending this advantage.

As an accounting measure, the act of 1910 required the postmaster general to produce and issue Official postal savings stamps for use on all government correspondence generated by the administration of the postal savings system.

Beginning in December 1910, Official postal savings mail stamps were issued in denominations of 1¢, 2¢, 10¢, 50¢ and $1 (Scott O121-O126). Use of the stamps was discontinued in October 1914, and unused stocks in the hands of local postmasters were returned and destroyed.

This stamp has been previously tipped, most recently in the Sept. 28, 2015, issue of Linn’s. The catalog values have not changed since then.

For a supposedly common stamp with such relatively low catalog values, you would think examples of it would be all over the marketplace, but that is not the case.