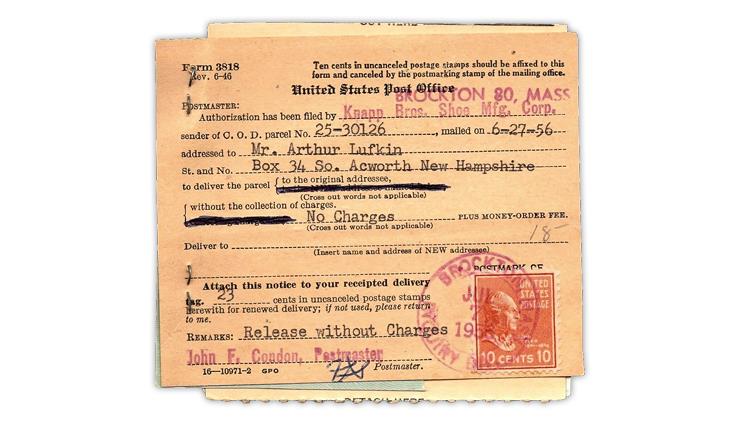 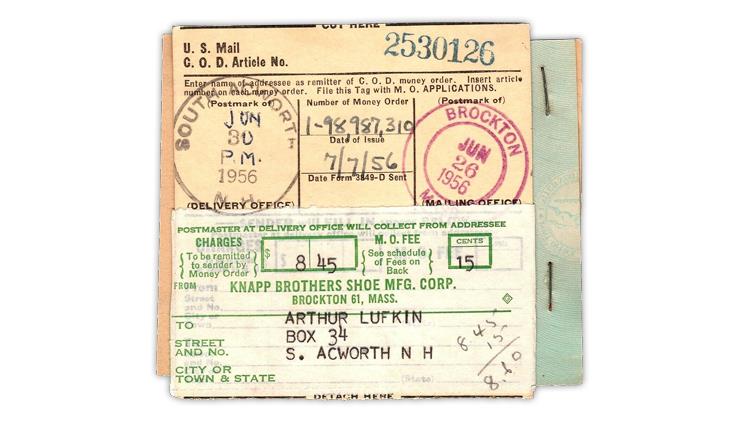 Figure 2. The Figure 1 form changing the c.o.d. terms was stapled to this c.o.d. collection-delivery tag for a parcel mailed June 26, 1956, in Brockton, Mass.
Previous
Next

Quiet bidding in the last hours of a recent five-day online auction raised the final bid to almost $400 for a United States postal form with a 1938 10¢ John Tyler Presidential series sheet stamp affixed.

The seller declined to include a description of the item. The details in eBay’s “Item specifics” fields consisted of “Uncertified,” “Ungraded,” “Quality: Used” and “Place of Origin: United States.”

At the same time, the seller had likewise listed hundreds of items in the postal history category.

This Form 3818 shows that a shoemaker who mailed a given c.o.d. parcel on June 27, 1956, had authorized delivery without collecting charges from the addressee. Changing c.o.d. terms cost 10¢, which in this instance was paid by the brown red 10¢ Tyler stamp (Scott 815) canceled July 7, 1956.

To change c.o.d. terms, senders were to contact mailing offices. A round date cancel of “Brockton, Mass. Inquiry Div.” was applied to the stamp. The form was forwarded to the delivery office, where it was stapled to the c.o.d. tag shown in Figure 2.

While eBay does not disclose bidder identification, it does provide a bidding history using masked names. In the second day of the auction, two bidders set the highest bid to $6. There it remained until the final day.

The last day of the auction saw the same two bidders and two new bidders raise the bid to $77.88 3 minutes before the auction closed. In the last seconds, a new fifth bidder offered $238.66, then an original bidder offered $388.89 and a new sixth bidder won with $393.89.

Noted Presidential series specialist Jeffrey Shapiro offered these comments shortly after bidding closed: “These COD change forms are very expensive because the service was rarely used. Some might say this $394 was a bargain. I recall a similar 10¢ Prexy COD change fee cost over $1,200 around 2009.”

Another knowledgeable collector, speaking on condition of anonymity, affirmed they would expect bidding at least one or two multiples higher in a better-publicized auction such as a conventional one using a printed catalog.

Lacking any searchable terms of the U.S. Presidential series of regular stamps between 1938 and 1954 likely suppressed higher bids.

“Prexie” and “Prexy” are popular terms. Specialists in the series relying on search terms would be unaware of this online auction.

Likewise specialists in postal forms seeking those as rarely seen as Form 3818 might search for “form.”

In recent years, after eBay removed most listing fees, the ongoing count of items offered has increased by an order of magnitude and then some.

Even in the postal history category, at least four sellers consistently offer hundreds of items at one time, some thousands, with low starting bids. Sellers listing at these bulk volumes do not spend time on item details beyond what can fit in the heading.

Some of these bulk sellers do reserve time for adding even more listings of what they consider premium items, usually under different eBay seller names. These also can number in the hundreds at one time, even if offered less frequently.

The c.o.d. tag in Figure 2 shows that the c.o.d. parcel to which it was attached was received in South Acworth, N.H., on June 30, 1956 (subject to ink markings applied to it). The delivery post office could act on change requests for c.o.d. parcels held for delivery problems.

In this case, the “Number of Money Order” and “Date of Issue” filled fields in Figure 2 seem to show the change request was made in Massachusetts on the day that c.o.d. charges were collected in New Hampshire.

So far I have not come across postal guidance that dealt with such exceptions at a third level. Perhaps the general but quite strict “request for refund” procedures allowed the sender some recourse to recoup the 10¢. Here, I think the sender had to accept it as a cost of business.

For collectors who can afford the time to sift online versions of dollar-box material, bargains often can be found (based on my experience). Sometimes patience might be rewarded by a gem of a find such as this Form 3818 that changed the terms of a c.o.d. parcel.

Ronald Blanks has collected stamps since 1968. He specializes in U.S. postal history of marketing mail and of mechanized postal improvements. He can be reached at rblanks_stamps@yahoo.com or Box 9282, Chesapeake VA 23321.