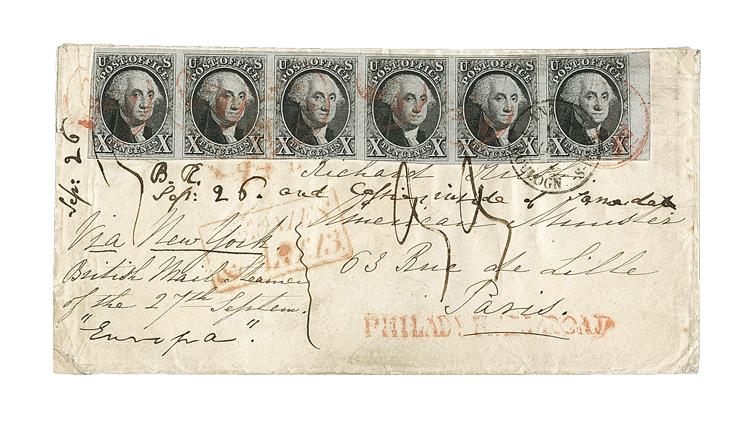 The 1848 Rush cover, mailed from Philadelphia to Paris, is franked with a strip of six of the 1847 10¢ black George Washington stamp, the largest multiple of this stamp on cover. It will be offered during the Oct. 27-29 auction by Robert A. Siegel Auction 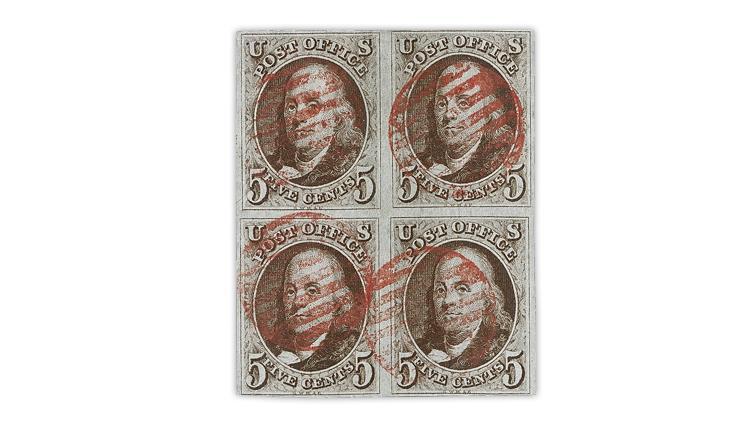 This block of four 1847 5¢ dark brown Benjamin Franklin stamps, known as the Caspary block, will be offered during the upcoming auction of first-issue U.S. stamps from the William H. Gross collection. 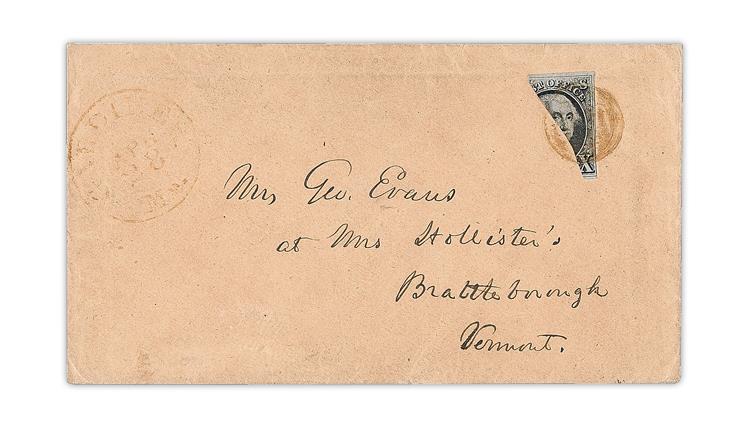 Among the many varieties included in the upcoming Siegel auction is this cover franked with a diagonal bisect of the 10¢ black George Washington stamp.
Previous
Next

Many great treasures of the first issue of United States stamps will be available to collectors during a specialized auction Oct. 27-29 in New York City.

This sale of the 1847 issue of U.S. stamps from the William H. Gross collection is offered by Charles F. Shreve and Tracy L. Carey in association with Robert A. Siegel Auction Galleries.

To attend the public auction in person, an advance request must be approved by the auction firm, with attendance further subject to COVID-19 restrictions in place.

The sale gathers together the many 1847 issue items — the first two postage stamps of the United States — that were not previously sold from the Gross collection in three dedicated auctions during the past two years.

For example, the unique unused block of six 10¢ black George Washington stamps known as the Bible block was offered and sold in the Oct. 3, 2018, first sale of this series titled United States Stamp Treasures.

But the legendary Rush cover to France, franked with a strip of six 10¢ stamps and once described by auctioneer Philip H. Ward Jr., as “the most important cover known to American philately,” is among the 563 lots offered in the upcoming sale.

The 1847 issue consists of two stamps, the 5¢ red brown Benjamin Franklin (Scott 1) and the 10¢ black Washington (2). But any study of those two stamps will lead the collector into plate and color varieties, postmark varieties such as color cancellations, die proofs and plate proofs, multiples, and the broad range of postal history that encompasses domestic and international mail and the specific markings that identify these uses and others.

All of this and much more is represented in the Gross collection sale.

The mailed envelope known as the Rush cover was sent in 1848 by Benjamin Rush in Philadelphia, Pa., to his father, Richard Rush, then the American minister to France stationed in Paris.

Writing about this cover in 1986, Scott R. Trepel (now Siegel president) pointed out that the strip of six stamps is the largest known multiple of the 10¢ on cover, and the use of the 1847 10¢ issue to pay the historic “retaliatory” postage rate is most unusual.

The cover is struck with a red railroad postmark applied in transit from its point of origin to the New York port, Trepel wrote.

Along with its prominence in the Gross collection, this well-known cover also has been in the collections of John F. Seybold, Henry C. Gibson Sr., Philip G. Rust and Leonard Kapiloff.

“For those with something less than a six-figure per item spending allowance,” Trepel wrote in an introduction to the sale catalog, “there are hundreds of lots that will bring limitless collecting joy for the price of a new cellphone.”

And each of those lots has the provenance of once being owned by Gross, a collector whose name is now prominently and permanently embedded in the history of philately.

There are many single used stamps of the 1847 issue in this sale displaying a broad range of attractive and colorful cancels, and additional rare multiples on cover and off.

A block of four used 5¢ stamps in the dark brown shade has earned the name the Caspary block for its former home in the collection of Alfred H. Caspary (1977-1955), a leading U.S. collector of the 20th century.

It was later owned by Edward A. Ring before Wade Saadi added it to his own gold medal collection.

The block is described by Siegel as “the finest recorded used block of the 5¢ 1847 Issue” with margins that are full to clear. The stamps are each struck with a red grid cancel.

The 5¢ stamp is unusual in the dark brown shade and therefore listed specifically in the Scott Specialized Catalogue of United States Stamps and Covers as Scott 1a, rather than Scott 1, which identifies the more commonly seen brown red shade.

The dark brown shade is also listed as a block in the catalog, but with no value showing for the used block. Siegel suggests an estimate of $20,000 to $30,000.

Among the mailed covers in this sale are a number franked with bisected 10¢ stamps cut diagonally (Scott 2a) to pay the 5¢ per half-ounce letter rate for domestic mail traveling less than 300 miles.

One example was mailed on a buff envelope from Gardiner, Maine, to Mrs. George Evans in Brattleboro, Vt.

The stamp on this cover is described as showing large margins to clear, with a crisp impression that shows a short transfer at top. It is tied by an orange red grid cancel.

The complete catalog of United States 1847 First Issue, the William H. Gross collection, can be downloaded as a PDF, but the published catalog also can be ordered directly from Siegel.

Bidding options, including online bidding, are described on the Siegel website.