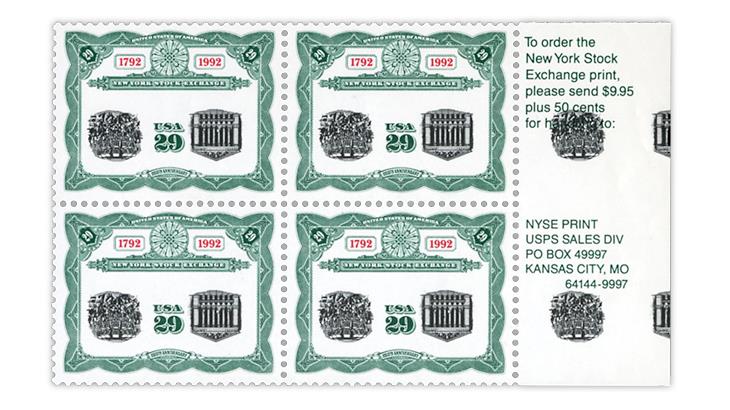 A highlight of the Sept. 13-14 Cherrystone Philatelic Auctioneers sale is this right-margin block of four of the United States 1992 29¢ Stock Exchange stamp with the engraved black vignettes inverted. Just 56 examples of this printing miscue, first discov 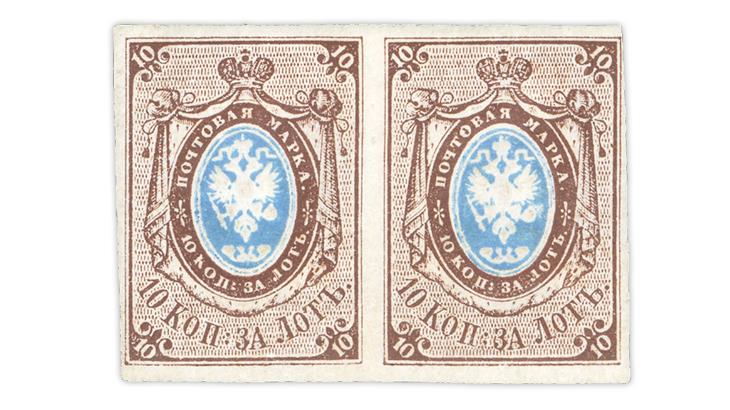 A rarity of Russia that will be up for bids during the Sept. 13-14 Cherrystone auction is this unused original gum pair of the 1857 10-kopeck brown and blue Coat of Arms stamp. Cherrystone is offering the pair with a starting bid of $75,000.
Previous
Next

Cherrystone Philatelic Auctioneers will offer slightly more than 1,600 lots of United States stamps and choice stamps and postal history from around the world in a sale to be held Sept. 13-14 at its gallery in Teaneck, N.J.

One of the more eye-catching items is an unusual error of a U.S. 29¢ stamp issued in 1992 to recognize the bicentennial of the New York Stock Exchange. The stamp was intended to look like a tiny stock certificate.

The two-day auction will be spread over four sessions, with sessions each day at 10 a.m. and 1 p.m. Eastern Time.

Highlights of the sale include graded U.S. stamps, proofs and essays of the popular U.S. 1869 Pictorial issue, a collection of rare plate blocks, flight covers and U.S. possessions, according to Cherrystone.

“There are rarities from Bolivia, China including an Inverted Hall of Classics, France and French Colonies, with better Zanzibar, Great Britain and British Commonwealth,” Cherrystone said.

Name collections that will cross the Cherrystone auction block include the Leslie Rose collection of Germany and colonies, and the Imants Timma collection of Latvia stamps and covers.

Also included in the sale is an impressive and long-overlooked collection of Imperial Russia, according to Cherrystone.

“Brought to the United States just after WWII, this collection, only recently unearthed, includes the remarkable unused pair of Russia Number One with original gum, a splendid holding of proofs and essays, (including a collection of 140 different Romanov Proofs) and much more,” Cherrystone said.

Enthusiasts of modern U.S. errors will have two well-known inverts to bid on.

The first of these miscues is the 1979 $1 Rush Lamp and Candle Holder stamp with the engraved brown omitted (Scott 1610c). Collectors refer to this error as the CIA Invert because it was discovered at a sub-post office in McLean, Va., by an on-duty CIA employee.

The Scott Specialized Catalogue of United States Stamps and Covers values a single CIA Invert in mint condition at $17,000, with the value in italics to indicate an item that trades infrequently in the marketplace. A block of four of the CIA Invert is not valued in the Scott U.S. Specialized catalog.

Note that the right selvage shows one complete inverted vignette and about one-third of the second, the result of misregistration due to the wide horizontal and vertical gutters (selvage between panes) of the original sheet of four panes of 40.

According to Cherrystone, the error block is “one of only two remaining blocks of this major U.S. error.”

“With only 56 examples known, this is considerably scarcer than both the Jenny and CIA inverts,” Cherrystone said.

A total of two 29¢ Stock Exchange panes of 40 containing 28 examples of Scott 2630c and 12 stamps with the engraved black vignettes missing (2630b, due to a color misregistration when the error was created) have been found thus far.

Linn’s Stamp News reported the discovery of the first 29¢ Stock Exchange double-error pane in a page 1 story in the March 4, 2002, issue. The pane came to light in Texas in December 2001. It was purchased not long after the stamp’s May 17, 1992, official first day.

Naomi Felblinger, an employee of Miami University in Oxford, Ohio, found the second Stock Exchange invert pane, which she had purchased not long after the stamp was issued.

Felblinger kept the error pane in a makeshift storage container in a shirt drawer for 13 years before bringing it to Linn’s to examine in August 2005. Linn’s published a full report of the discovery of this second Stock Exchange error pane in the Sept. 5, 2005, issue.

A mint single of the 29¢ Stock Exchange invert stamp is valued at $17,000 in the Scott U.S. Specialized catalog.

The Stock Exchange invert is one of the most subtle of the U.S. inverts, a group restricted to 13 different stamp issues going back to 1869.

The images are small and relatively symmetrical so that, at first glance, it can be difficult to distinguish whether they are right side up or upside down.

A marvelous rarity of Russia, an unused pair of the 1857 10-kopeck brown and blue Coat of Arms stamp (Scott 1) with original gum, will cross the auction block during the second day of the sale.

“An unused Russia [Scott] Number One single is a world-class rarity, of which only a few have been recorded,” Cherrystone said.

“Outside of the Popov Museum in St. Petersburg, this is the only genuine unused pair of the first stamp of Russia in private hands.”

The pair has a light bend between the stamps, complete embossing and vivid colors, according to Cherrystone.

A footnote accompanying the listing for Russia Scott 1 in the 2023 Scott Standard Postage Stamp Catalogue states: “Genuine unused examples of No. 1 are exceedingly rare. Most of those offered are used with pen cancelation removed. The unused value [$62,500] is for an example without gum. The very few known stamps with original gum sell for much more.”

A 2022 certificate from noted Russia expert Paul Buchsbayew states the pair “is genuine in all philatelic respects.”

Cherrystone is offering this pair of the 1857 10-kopeck brown and blue Coat of Arms stamp with an opening bid of $75,000.

The catalog for the Sept. 13-14 U.S. and worldwide sale can be viewed and is available for download on the Cherrystone website, with online bidding options available.