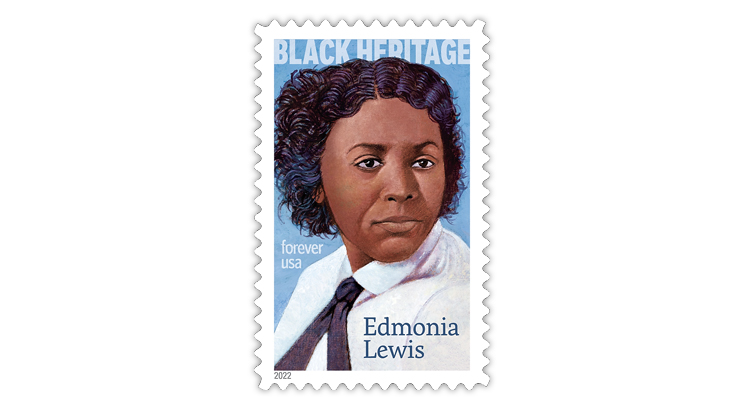 The Edmonia Lewis commemorative forever stamp from the United States Postal Service will be issued Jan. 26 with a first-day ceremony in Washington, D.C.

The United States Postal Service has revealed details of the Jan. 26 first-day ceremony for its Edmonia Lewis commemorative forever stamp.

Although the ceremony is free and open to the public, the Postal Service recommends that those interested in attending respond on the USPS website. Due to size limitations, registration will be filled on a first-come first-served basis.

This is the 45th stamp in the Black Heritage series. Sculptor Edmonia Lewis (1844-1907) “challenged social barriers and assumptions about artists in mid-19th century America,” according to the USPS.

Of African-American and Native American descent, Lewis produced work that “evokes the complexity of her social identity and reflects the passion and independence of her artistic vision,” the USPS said.

Alex Bostic, who created the original artwork shown on the stamp, based the portrait on a photograph of Lewis taken in Boston sometime between 1864 and 1871, the USPS said.

The USPS adds that ceremony attendees will get to see Cleopatra, one of Lewis’ well-known creations.