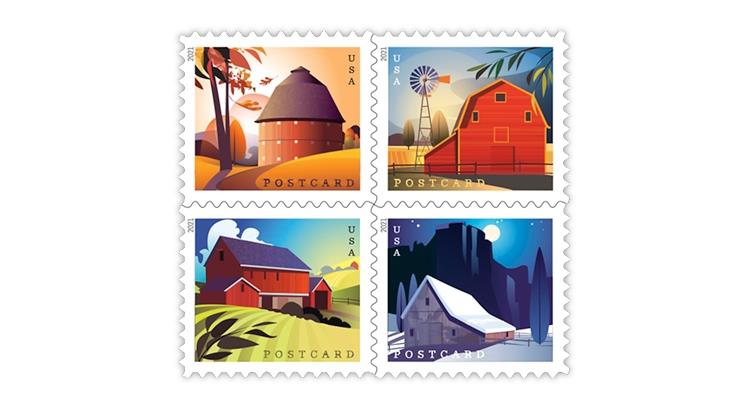 New postcard-rate stamps for the United States will feature four barns in four different seasons. The stamps will be issued Jan. 24 in coils of 100 and panes of 20. 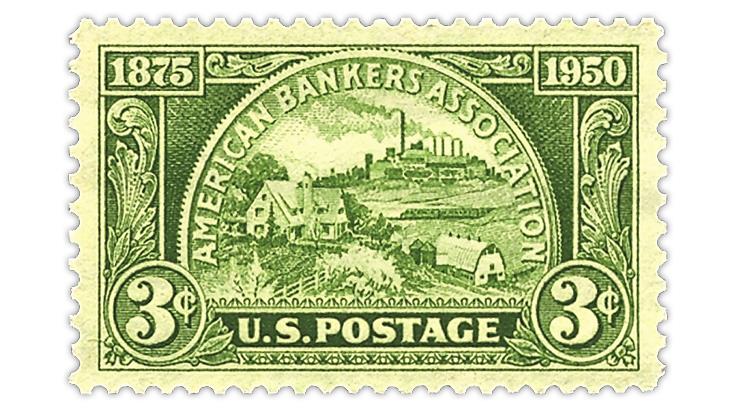 One of the earliest U.S. stamps to show a barn is this 1950 3¢ American Bankers Association stamp. A gambrel-roofed barn is visible at lower right in the stamp vignette. 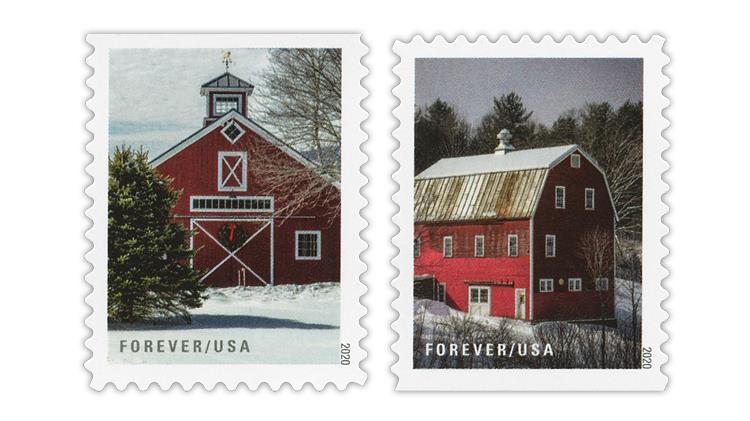 Barns were recently featured on two forever stamps in the set of 10 Winter Scenes stamps issued Oct. 16, 2020.
Previous
Next

A 1¢ increase in the postage rate for mailing postcards within the United States has brought about a new set of Barns stamps to be issued in a coil of 100 and a pane of 20.

The stamps will be issued Jan. 24. The Sunday issue date is also when the new rate goes into effect.

The designated city of issue is Barnesville, Ga. U.S. Postal Service officials have not announced plans for a first-day ceremony.

Each stamp in the new set specifically depicts a barn in one of the four seasons. Designed by Ashley Walton, the stamps feature original digital artwork by Kim Johnson. USPS art director Greg Breeding oversaw the project.

According to the Postal Service, the designs show “a round barn surrounded by the hazy light and warm colors of fall; a gambrel-roofed barn in summer; a forebay barn in an early spring countryside; and a Western barn on a winter’s night.”

Each stamp in the new set also includes the word POSTCARD lettered along the bottom of the illustration, and USA printed in a vertical stack at an upper corner.

The designs celebrate the beauty and history of American barns, according to the USPS.

While the round barn in the Postal Service’s description is self-evident, the other barn types might be unfamiliar to some.

A gambrel-roofed barn has a traditional shape with two slopes on each side of the roof. One function of the design is that it increases storage space in upper levels of the barn.

The stamp showing the multiblade wind pump at left depicts the gambrel-roofed barn.

The structure of a forebay barn includes a projection over the foundation (which is often set into a bank), to hold grain and hay, for example. The forebay barn is shown on the stamp with a bold white cloud behind it.

The moonlit stamp scene in the snow shows a Western barn with a sloping extended roofline.

Barns are a familiar sight throughout rural America, providing storage for livestock and feed, farm vehicles and other agricultural implements.

The new stamps will remain valid for the prevailing domestic postcard rate regardless of future rate changes.

An early U.S. stamp showing a barn was issued more than 70 years ago, but the subject was the American Bankers Association. The barn on the 1950 3¢ stamp (Scott 987) appears as a small part of the stamp’s larger vignette.

The imprinted stamp on a 1995 20¢ postal card pictures a red barn in a peaceful sunlit scene (Scott UX198).