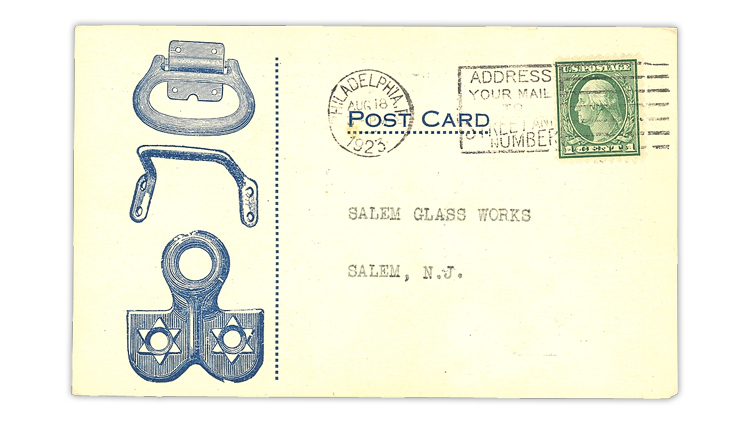 One of the more desirable covers is an advertising postcard franked with the scarce 1922 1¢ green George Washington stamp produced from rotary press sheet waste (Scott 544).

A clear Aug. 18, 1923, Philadelphia, Pa., slogan cancel neatly ties the stamp to the card, which is addressed to the Salem Glass Works in Salem, N.J.

Bennett describes the stamp as a “choice example” and notes that the postcard comes with expertizing certificates from the Philatelic Foundation issued in 1978 and 2014.

Scott 544 is valued used on cover at $5,500 in the Scott Specialized Catalogue of United States Stamps and Covers. This value is italicized to indicate that little market data was available to the Scott editors.

The pair has ample to large margins and bears concentric ring cancels. Three expertizing certificates have been issued for the pair. The Philatelic Foundation examined the pair in 1961 and 1984, and the Vincent Graves Greene Philatelic Research Foundation in 2015.

Bennett has prepared a single auction catalog for its June 11-12 sale. The catalog is available for download.