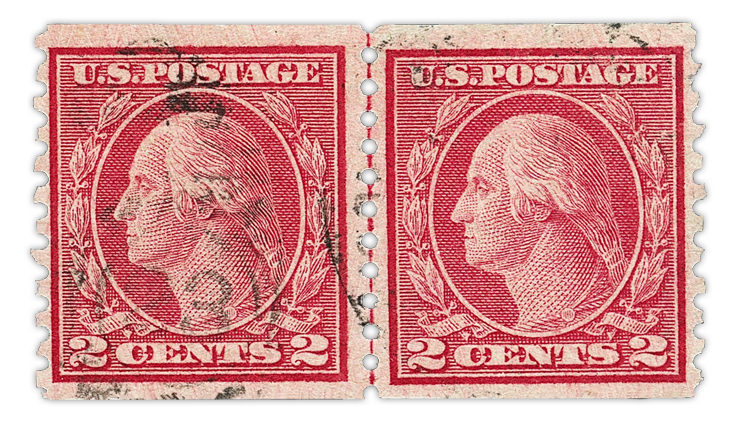 This rare used joint line pair of the 1916 carmine Washington type II is from the James Depew collection. It is being offered in the July 23-25 Siegel auction.

The Robert A. Siegel auction scheduled for July 23-25 offers material from the United States and the Confederate States, as well as essays, proofs and specimens; back of the book including revenues and U.S. possessions; plus collections and accumulations.

The auction’s first session includes a number of unused and used examples of the 1847 issue, the first federal postage stamps of the United States.

A used strip of three of the 10¢ black George Washington (Scott 2) is struck with “vivid red grid cancels,” showing margins that range from large at left to in at the bottom. Accompanied by a 2007 Philatelic Foundation certificate, the strip is listed with the 2019 Scott catalog value of $10,000. The catalog gives that figure in italics, indicating an item that can be difficult to value accurately.

The example in the Siegel sale is lightly struck with a duplex cancel. The Siegel census of used joint line pairs of the type II horizontal coil counts only 12 known, including one in a strip of three and another in a strip of five. The Scott catalog values the used line pair at $20,000 in italics.

The pair on offer has a small corner crease at top right on the stamp at right, Siegel notes.

The Siegel auction catalogs can be viewed online, with online bidding options available.