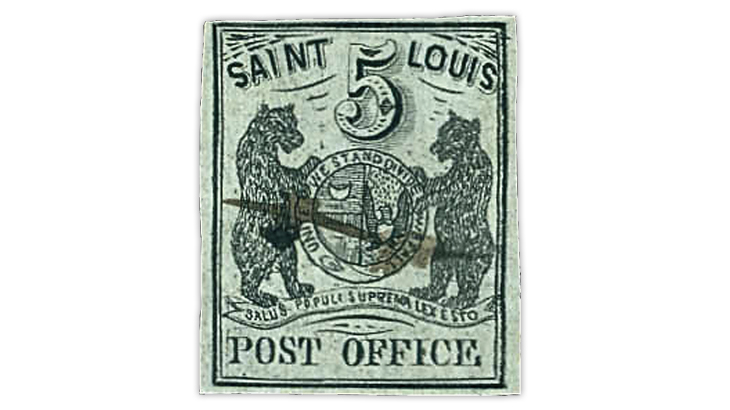 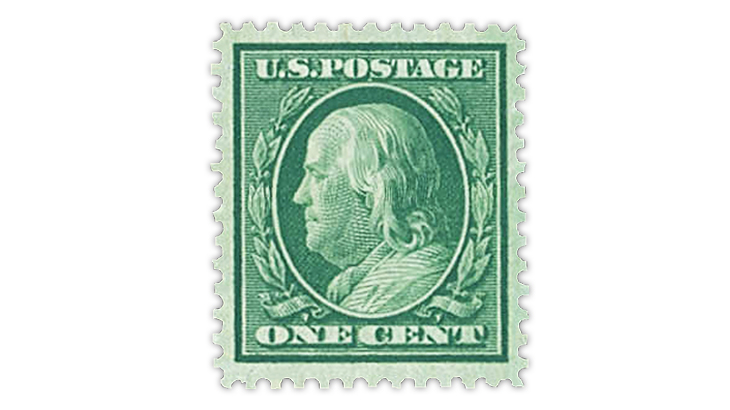 In 2006 the Philatelic Foundation assigned the grade of extra fine 90 to this mint never-hinged 1909 1¢ Benjamin Franklin on bluish paper that will be up for bids during the Kelleher Flagship auction.
Previous
Next

Approximately 550 lots of essays and proofs will be up for bids on Tuesday, June 9, the first day of the sale.

The Scott Specialized Catalogue of United States Stamps and Covers values Scott 2P1b at $1,250. The example in the Kelleher sale, which the firm describes as being in extremely fine condition, is listed with an estimate of $1,000 to $1,500.

Among the stamp highlights is a handsome used example of the 1845 5¢ black St. Louis, Mo., postmaster’s provisional stamp on greenish paper (Scott 11X1).

Collectors often refer to the St. Louis postmaster’s provisional stamps as the St. Louis Bears, because the design features two bears holding the coat of arms of the state of Missouri.

Kelleher describes the 5¢ St. Louis Bear in the sale as being “printed on wonderfully tinted paper” and possessing a “light, unobtrusive manuscript pen stroke cancel.” A 2019 Professional Stamp Experts certificate accompanies the stamp, according to Kelleher.

The sale concludes Thursday, June 11, with more than 500 lots of 20th-century U.S. stamps and U.S. possessions.

A substantial number of Washington-Franklin stamps will cross the Kelleher auction block, including an attractive mint never-hinged example of the 1909 1¢ Benjamin Franklin on bluish paper (Scott 357).

Kelleher notes that the stamp has been expertized twice by the Philatelic Foundation: in 1989, when the stamp was part of a block; and in 2006 as a single stamp, when the foundation assigned it the grade of extra fine 90. Both certificates are included with the stamp.

Kelleher lists the stamp with an estimate of $300 to $400. An XF-90 example of Scott 357 in mint never-hinged condition is valued at $420 in the Scott Stamp Values section of the Scott U.S. Specialized catalog.

A single catalog has been prepared for the three-day U.S. Flagship auction and can be viewed on the Kelleher website, with online bidding options available.