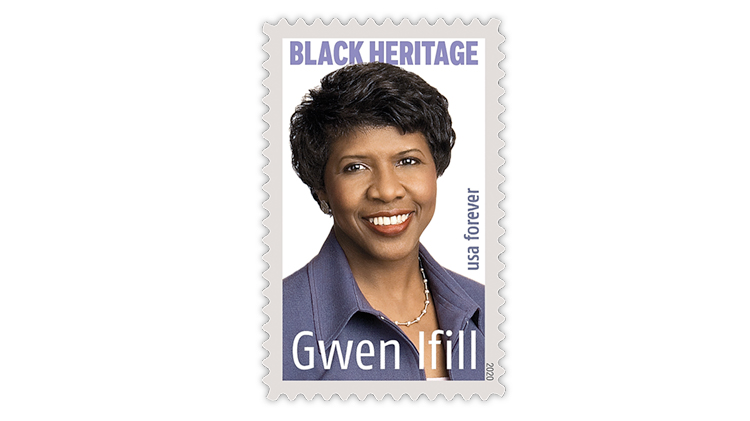 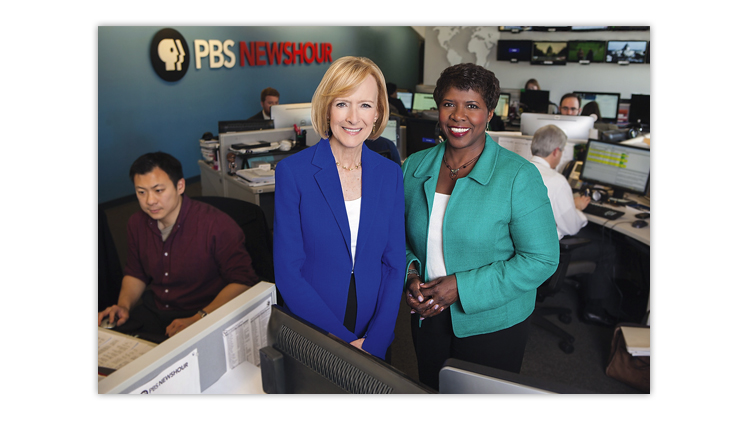 Judy Woodruff and Gwen Ifill were named as co-anchors of PBS NewsHour in 2013 and worked together until Ifill’s death in 2016. Woodruff continues today as the news program’s anchor and managing editor. PBS NewsHour photo used with permission. 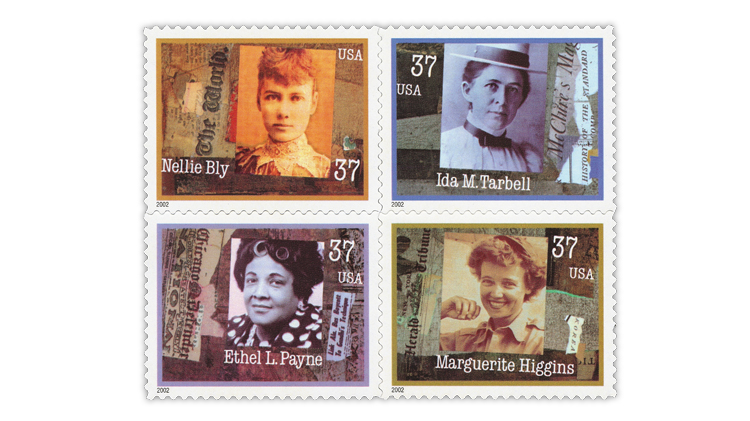 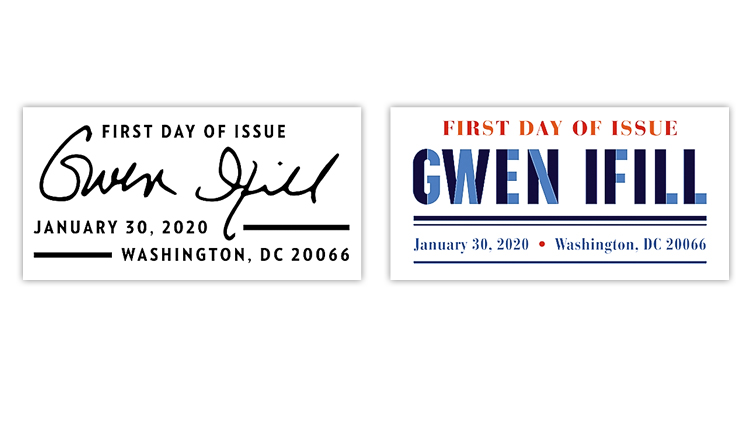 Two special first-day cancels are being offered for the Gwen Ifill stamp. The black postmark reproduces the journalist’s signature.
Previous
Next

The nondenominated (55¢) forever stamp is the 43rd issue in the Black Heritage commemorative series. The first stamp in the annual series was issued Feb. 1, 1978, for abolitionist Harriet Tubman.

The first-day ceremony for the Gwen Ifill stamp will take place at 11 a.m. in Washington, D.C., at Metropolitan African Methodist Episcopal Church, 1518 M St. NW, where Ifill attended services for many years, and where her funeral was held Nov. 19, 2016.

The Postal Service encourages advance registration for anyone planning to attend the stamp ceremony. Registration details are available on the USPS website.

USPS art director Derry Noyes designed the new stamp using a photograph of Ifill taken in 2008 by photographer Robert Severi. The photo is shown against a white background, with Ifill’s name spelled out in white along the bottom of the design. The portrait is framed in pale purple.

USPS contractor Banknote Corporation of America printed the self-adhesive stamp by offset lithography with microprinting and processed it in panes of 20.

Gwen Ifill was familiar to many Americans as the co-anchor and co-managing editor of PBS NewsHour, the evening news program on the Public Broadcasting Service. Judy Woodruff, the former PBS White House correspondent, was named co-anchor and co-managing editor on the same day as Ifill, Aug. 6, 2013. The two women became close friends and worked side-by-side until Ifill’s illness and death at age 61 from cancer on Nov. 14, 2016.

Ifill was born in New York on Sept. 29, 1955, in the Queens neighborhood of Jamaica, the daughter of immigrants from Panama and Barbados. Her father was an African Methodist Episcopal Church minister, and Ifill lived in different parts of the eastern United States while growing up.

She attended Simmons College in Boston, graduating in 1977 with a bachelor of arts degree in communications.

Her career began in print journalism, first with the Boston Herald American, followed by the Baltimore Evening Sun, the Washington Post and then as White House correspondent for The New York Times.

She entered the arena of television news in 1994 on NBC, and then moved to PBS in 1999, working as a senior correspondent and host of Washington Week. She was the first woman and first African-American to moderate a major television news analysis show.

Early in 2009 her book, The Breakthrough: Politics and Race in the Age of Obama, was published by Doubleday.

Throughout her career Ifill was regularly praised for her perception, her honest reporting and her leadership.

Loretta Lynch, who served as U.S. attorney general from 2015 to 2017, said of Ifill, “She pursued her reporting with grace, intelligence and integrity, earning her the trust of countless Americans who counted on her to present the facts of the story without slant or spin.”

Ifill was also known as a mentor and role model to many young reporters.

“She not only informed today’s citizens, but she also inspired tomorrow’s journalists,” President Barack Obama said following her death in 2016.

The Postal Service stated: “Among Ifill’s honors were the Radio Television Digital News Foundation’s Leonard Zeidenberg First Amendment Award (2006), Harvard’s Joan Shorenstein Center’s Goldsmith Career Award for Excellence in Journalism (2009) and induction into the National Association of Black Journalists Hall of Fame (2012). In 2015, she was awarded the Fourth Estate Award by the National Press Club. She received numerous honorary degrees and served on the boards of the News Literacy Project and the Committee to Protect Journalists, which renamed its Press Freedom Award in her honor.

“The 2016 John Chancellor Award was posthumously awarded to Ifill by the Columbia Journalism School. In 2017, the Washington Press Club Foundation and the PBS NewsHour created a journalism fellowship named for Ifill. Her alma mater, Simmons University, opened the Gwen Ifill College of Media, Arts, and Humanities in 2018.”

On first-day covers for the Gwen Ifill stamp offered by the Postal Service, the pictorial first-day cancels focus on Ifill’s name, as a reproduction of her signature on the black postmark, and in stencil-style lettering in shades of blue on the digital color postmark.