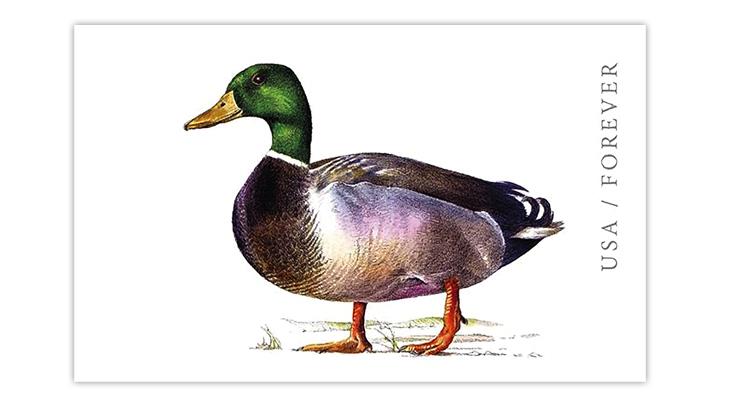 A new postal card from the United States Postal Service will be issued June 1. The imprinted stamp design pictured here is Dugald Stermer’s pencil and watercolor illustration of a mallard drake. 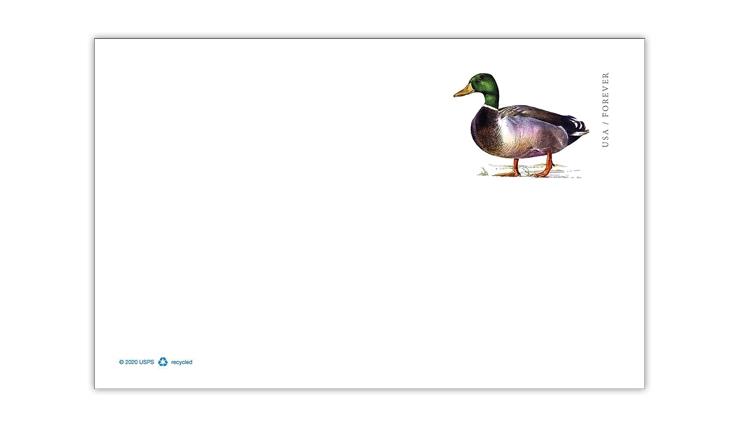 The mallard drake stamp design is imprinted on both the single postal card pictured here and on a reply postal card to be issued the same day. 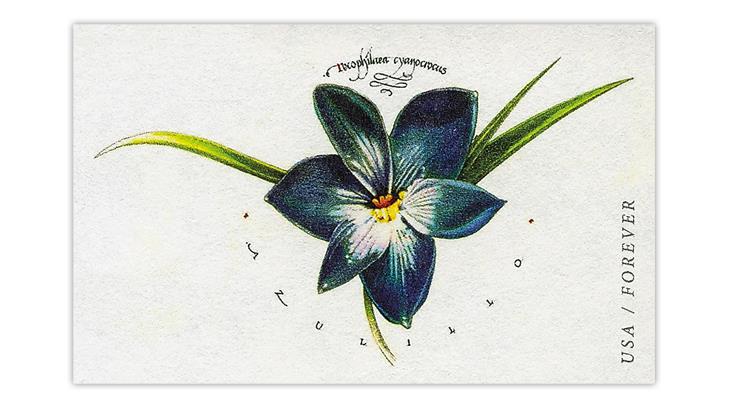 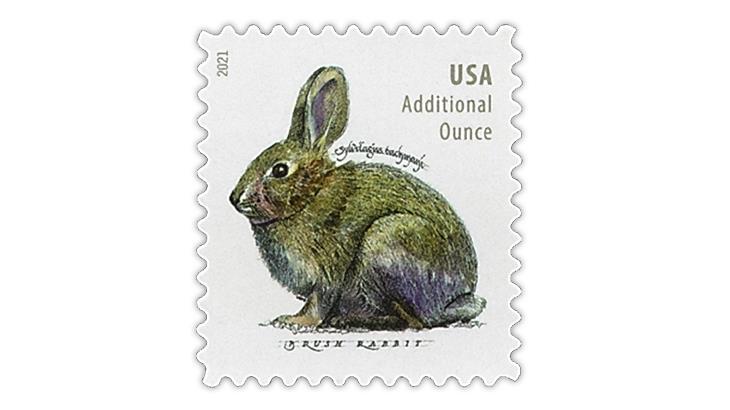 Stermer’s illustration of a brush rabbit was featured on two nondenominated additional-ounce stamps issued in January, one a coil and the other (shown here) from a pane of 20.
Previous
Next

The United States Postal Service will issue a new postal card June 1, and what many collectors might not realize is that nearly four years have passed since the last time that happened.

The imprinted stamp on the new postal stationery item features the image of a mallard drake made years ago by Dugald Stermer, a prominent illustrator and designer who died in 2011 at age 74.

It is the second consecutive U.S. postal card to feature one of Stermer’s lifelike nature illustrations. The last one, which the Mallard Drake postal card presumably will replace in post office stocks, shows a plant, not an animal: Tecophilaea cyanocrocus, also known as the Chilean blue crocus, and occasionally referred to as “azulillo.”

In delicate calligraphy, Stermer lettered the scientific name above the pretty blue flower, and the Spanish nickname, which roughly translated means “little blue thing,” below it.

There isn’t any such lettering on the new Mallard Drake card. The duck is classified as Anas platyrhynchos, a common waterfowl in the Northern Hemisphere.

Stermer’s drawing of it was completed in pencil and watercolor.

No first-day ceremony is planned for the nondenominated postal card, which fulfills the 36¢ rate for postcards, but costs 40¢ to purchase.

The inscription on the card simply reads “USA/FOREVER,” much like postage stamps for the first-class domestic letter rate. The postal card is always valid for the current postcard rate, even if that rate changes in the future.

The single postal card will be sold in packs of 10 by the Postal Service through its online retail outlet, but presumably will be available individually over post office counters.

A Mallard Drake paid reply card will be issued as well with the same imprinted stamp design. It’s the equivalent of two postal cards joined on a long edge that can be mailed folded and intact to a correspondent. The recipient can detach the reply section of the card, address and return it postage paid with a newly added reply message.

The paid reply card will retail for 80¢.

Many past postal card issues have also been made available in uncut sheets of 40 cards that commercial mailers can use to print and mail in large quantities. That might be possible for the Mallard Drake postal card as well, but the Postal Service has not yet announced the availability of such a sheet.

Stermer’s career as an artist, art director, graphic designer, and illustrator includes his illustration on the cover of the first issue of Mother Jones magazine in 1976, his close association with Ramparts magazine as art director, and his design of the medals awarded during the 1984 Olympic Summer Games in Los Angeles.

On Jan. 24, the Postal Service issued two nondenominated (20¢) stamps — one in a pane of 20 (Scott 5544) and the other in a coil of 100 (5545) — showing a brush rabbit, another of Stermer’s illustrations. The stamps fulfill the additional ounce rate for first-class domestic letter mail.

Although the mallard is a common sight in the United States, it has not been featured on a lot of U.S. postal products. Perhaps its most prominent appearance was on a 13¢ stamp in 1978, as one of eight creatures pictured on stamps on the Canadian International Philatelic Exhibition souvenir sheet (Scott 1757b).

On the other hand, mallards have appeared on a half dozen federal duck stamps, including the $3 stamp from 1959 that prominently shows a Labrador retriever holding a dead drake in its mouth (Scott RW26).

The U.S. Fish and Wildlife Service (which issues the federal duck stamp as a license for waterfowl hunters) identifies the mallard as the most abundant duck species in North America.

“The Mallard drake is often called a ‘greenhead’ due to its distinctive iridescent green head and neck, a white neck ring and a brown breast,” according to the government agency. “The drake’s body is gray and the rump is black with a white tail. The hen has a mottled brown body with an orange and black bill. Both the hen and drake have blue wing patches bordered with white bands.”

The mallard is found in many freshwater habitats, including ponds, rivers, lakes and marshes. As a dabbling duck, it dines on vegetation that grows in shallow water, tipping forward to catch the plants in its bill. It is also known to graze on land and consume grain, insects and other small invertebrates.

The years between the issuance of the Azulillo postal card and the new Mallard Drake card suggest that the popularity of the postal card as a form of mailed communication has faded.

In the early years of the 21st century, the Postal Service would issue 40 postal cards or more each year. Many were postal card companions to commemorative stamps offered in sets of 20 or fewer.

Sixteen postal cards were issued in 2012, but only one postal card design was issued in each of the three years that followed, with a two-year gap before the Azulillo card appeared.