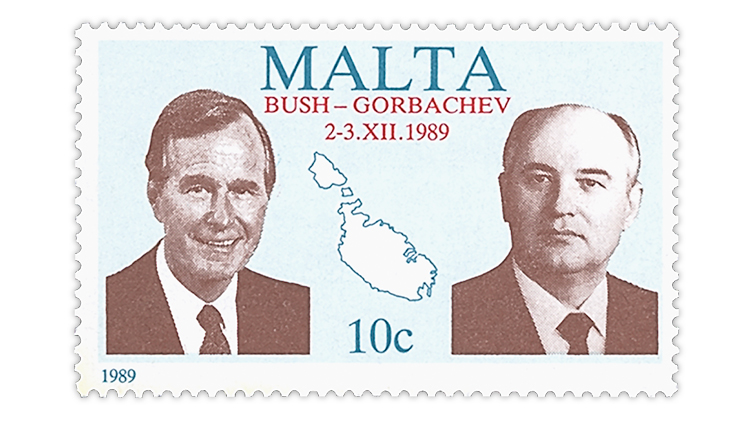 President George H.W. Bush is pictured with Mikhail Gorbachev, then leader of the Soviet Union, on a 10¢ stamp from Malta issued in 1989. Mr. Bush died Nov. 30 at age 94.

Tributes to honor former United States President George H.W. Bush, who died Nov. 30 at age 94, have been offered by friends and family, other individuals and national leaders from around the world.

Mr. Bush was the nation’s 41st president, serving in that position from 1989 to 1993. He had served previously as vice president to President Ronald Reagan, director of the Central Intelligence Agency, ambassador to the United Nations, and U.S. Congressional representative from Texas.

If tradition holds true, a U.S. memorial postage stamp honoring Mr. Bush should be issued in the coming months.

For many years the U.S. Postal Service observed a 10-year waiting period after an individual’s death before issuing a stamp to honor him or her.

U.S. presidents have always been an exception to that waiting period, and for many years USPS stamp subject selection criteria stated that U.S. presidents “may be honored with a memorial stamp on the first birth anniversary following death.”

The stamp honoring Ford was issued roughly six weeks after his birth anniversary; Ford was born July 14, 1913, and the stamp was issued Aug. 31, 2007.

The U.S. stamp subject selection guidelines were revised last year and now specify a three-year waiting period before proposals for a deceased individual will be considered.

The current guidelines simply state, “A memorial stamp will be issued honoring U.S. presidents after they are deceased,” an apparent exception to the three-year waiting period but no longer including the birth anniversary specification.

Any new postage stamp honoring Mr. Bush will not be the first to show the American president.

It is not unusual for U.S. presidents to be featured on stamps from countries that do not have guidelines prohibiting the depiction of living people.

The European island nation of Malta in the Mediterranean Sea was the site of a summit meeting between President Bush and Soviet Union leader Mikhail Gorbachev Dec. 2-3, 1989, and Malta issued a 10¢ stamp honoring the event on its opening day (Scott 748).

The stamp shows photographs of the two leaders as well as an outline map of Malta.

CNN and other news agencies have reported that Gorbachev recently recalled their meeting and expressed condolences on the president’s passing.

“We had a chance to work together during the years of tremendous changes,” Gorbachev is quoted as saying. “It was a dramatic time that demanded great responsibility from everyone. The result was an end to the Cold War and the nuclear arms race. I pay tribute to the contribution of George H.W. Bush to this historic achievement. He was a real partner.”