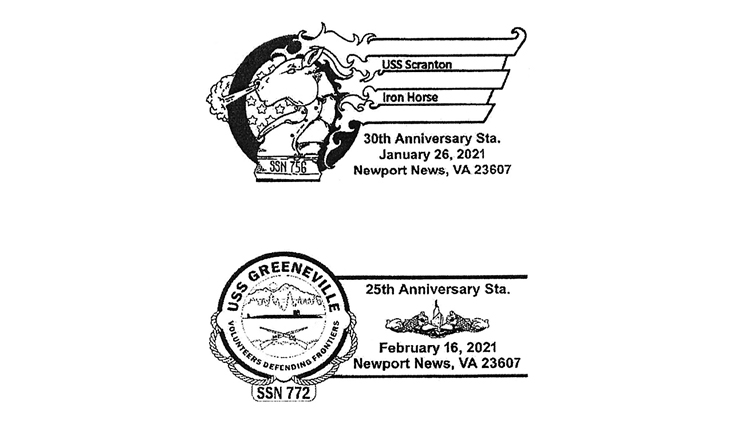 These cancels for the USS Scranton and USS Greeneville mark milestone anniversaries for the submarines.

Two of the United States Navy’s Los Angeles-class attack submarines are hitting milestones this year, and pictorial cancels are available for each occasion.

The first postmark is for the 30th anniversary of the USS Scranton (SSN-756). Nicknamed the Iron Horse, the vessel is the second Navy ship to be named after Scranton, Pa.

The Scranton has earned its moniker over the years, being called into action several times. During Operation Odyssey Dawn in March 2011, the Iron Horse deployed Tomahawk cruise missiles from the Mediterranean at Libyan air defenses.

The second postmark celebrates 25 years of the USS Greeneville (SSN-772), named for Greeneville, Tenn., home of U.S. President Andrew Johnson. The ship’s title was granted to the small American town after local residents, businesses and government officials campaigned for a submarine to be named after their community.