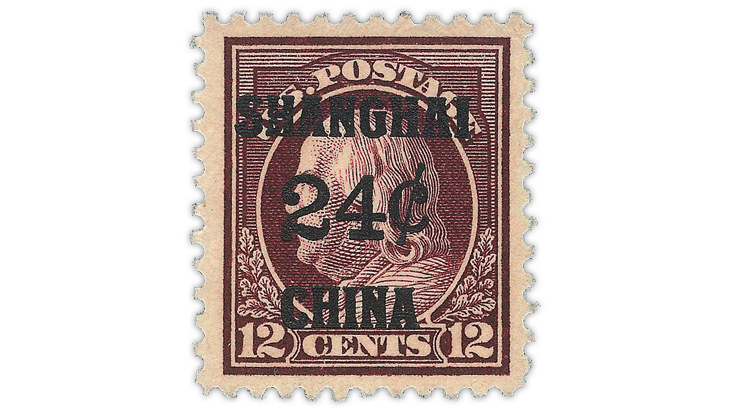 The United States Postal Agency in China 24¢-on-12¢ claret brown Benjamin Franklin stamp is in good demand and selling at 75 percent to 95 percent of Scott catalog value.

Offices abroad stamps are issued for use from extraterritorial post offices operated in foreign countries. The United States issued postage stamps for use by the U.S. Postal Agency in Shanghai, China.

These stamps were first issued May 24, 1919, and were placed on sale at the agency in Shanghai on July 1, 1919. They were not issued to or sold by postmasters in the United States.

The postal agency in Shanghai was closed in December 1922, and the stamps were sold from the Philatelic Agency in Washington, D.C., for a short time after that.

These stamps are listed with catalog numbers prefixed by the letter “K” in the Scott Specialized Catalogue of United States Stamps and Covers.

The U.S. Postal Agency in China stamps are popular with collectors because of the low quantity of stamps issued, limited period of use and appeal to collectors of both China and the United States.

Stamps in the grade of very fine are a good buy at 75 percent to 95 percent of Scott catalog value. Expertization is a must when buying stamps in used condition or mint, never-hinged condition.