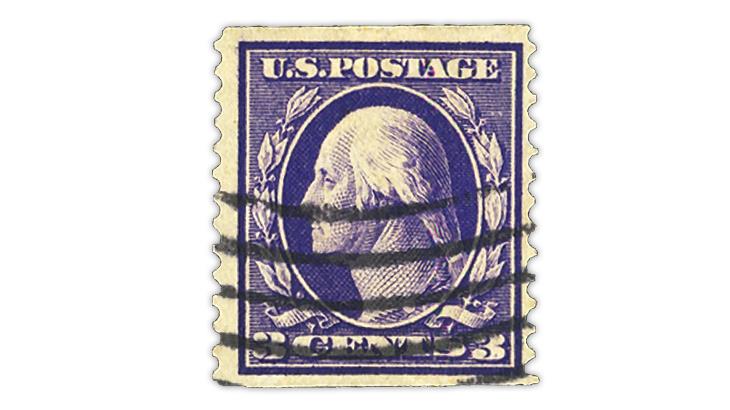 A used United States 1911 3¢ deep violet George Washington type 1 horizontal coil stamp will be up for bids during the Feb. 1-2 Cherrystone Philatelic Auctioneers sale. This scarce issue is known to collectors as the Orangeburg coil. 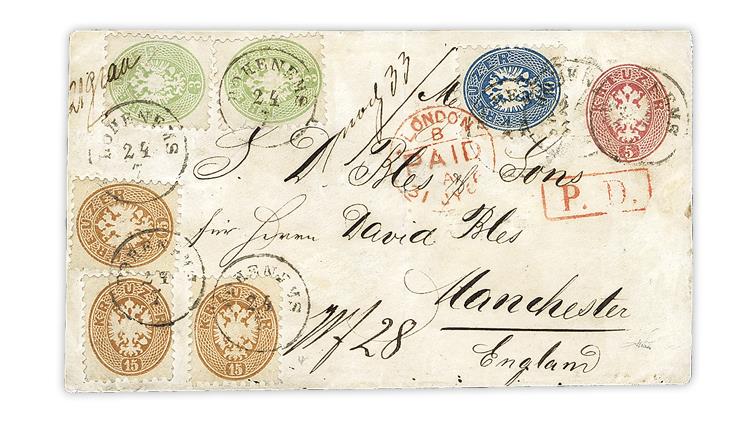 Collectors seeking Austrian postal history in the Cherrystone sale are sure to find appealing this cover mailed July 24, 1866, from Hohenems to Manchester, England, with a four-color franking. The 5-kreuzer rose Coat of Arms stamped envelope is franked wi 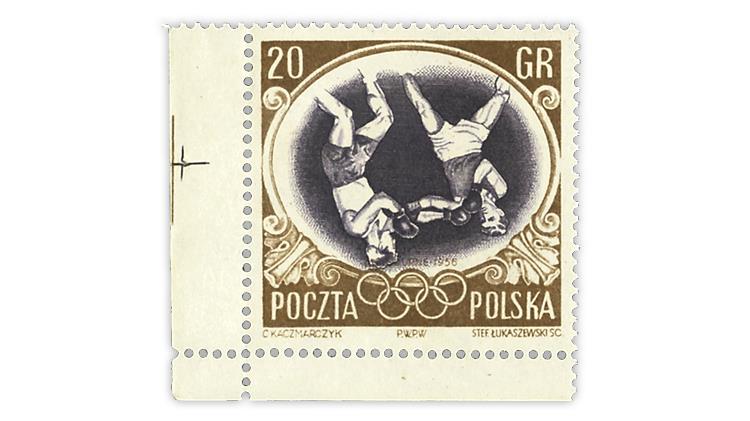 Cherrystone Philatelic Auctioneers will serve up more than 1,300 lots of desirable 19th- and 20th-century United States stamps and choice stamps and postal history from around the world during a sale to be held Feb. 1-2 at its headquarters in Teaneck, N.J.

In an overview on its website, Cherrystone said the sale “begins with United States and Possessions, including 19th and 20th Century single rarities, graded items, proofs, essays and back of book material.”

Also up for bids will be collections formed by Clive Metcalfe, M.K. Blumenthal and other notable collectors.

Worldwide highlights include “a collection of Large Dragons of Shanghai, as well as strong sections of France and Colonies, Germany and British Commonwealth,” according to Cherrystone.

Additional temptations for bidders include an important collection of Persia and Iran, along with rare Japanese postal history.

A key U.S. rarity will cross the auction block early in the sale: a used 1911 3¢ deep violet George Washington type 1 horizontal coil stamp, known to collectors as the Orangeburg coil.

The Post Office Department produced this stamp for the exclusive use of the Bell Pharmaceutical Co., which used the stamp to mail product samples to physicians. These samples were mailed from the post office in Orangeburg, N.Y.

The Orangeburg coil in the Cherrystone sale bears a wavy-line machine cancel and margins that are clear of the design on all four sides. Unlike many examples of the stamp, this one is completely sound.

“Due to the coil stamps’ use on mass mailings, many of the surviving copies are faulty to some extent. The most common defects are corner creases or tears,” Cherrystone said.

Accompanying the stamp are 1976, 2002 and 2008 Philatelic Foundation expertizing certificates stating that it is genuine.

A cautionary footnote in the Scott Specialized Catalogue of United States Stamps and Covers advises: “Stamps offered as No. 389 sometimes are examples of No. 376 [the 1911 3¢ deep violet George Washington type 1 sheet stamp] with top and/or bottom perfs trimmed. Expertization by competent authorities is recommended.”

Against a Scott U.S. Specialized catalog value of $10,000, Cherrystone lists this Orangeburg coil with an opening bid of $5,250.

According to Cherrystone, the cover was sent via Innsbruck to Manchester. A London “PAID” handstamp, which just ties the 10kr blue to the cover, is dated July 31. Backstamps (not shown) confirm the cover arrived in Manchester.

Cherrystone is offering this cover with a splendid four-color franking with a minimum bid of $2,800.

Collectors of modern errors will find bidding opportunities scattered throughout the two-day auction.

One of the more eye-catching errors is a Poland 1956 20-groszy light brown and dull violet Olympic Games Melbourne with the dull violet vignette picturing two boxers inverted (Scott 751a).

This error stamp is a sheet-margin single from the bottom left corner of the pane and has never-hinged original gum. Cherrystone describes it as a “truly superb modern rarity from Poland.”

A mint, never-hinged example of the error is valued at $17,500 in the Scott Standard Postage Stamp Catalogue.

Cherrystone is offering this 20gr Olympic Games Melbourne invert with a minimum bid of $20,000. It is one of 14 examples of the error known to exist, according to Cherrystone.

The catalog for the Feb. 1-2 U.S. and worldwide sale can be viewed and is available for download on the Cherrystone website, with online bidding options available.