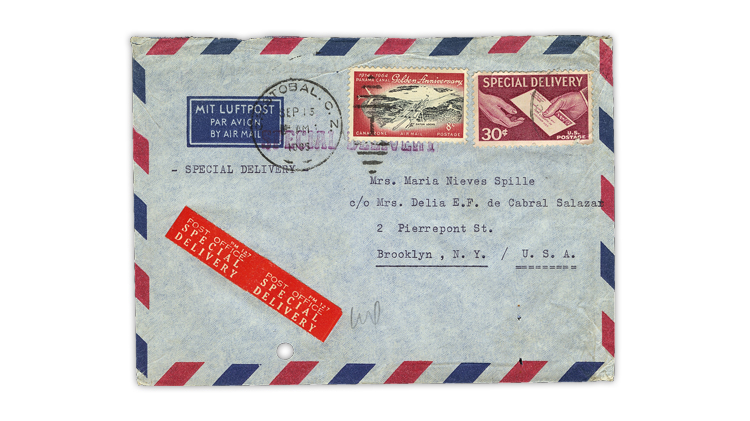 When the United States took over administration of the Panama Canal Zone under terms of the Hay-Bunau-Varilla Treaty of 1903, there was no time to print stamps for the new entity. Instead, the local authorities added Canal Zone overprints to Panamanian stamps, which were used for the next 20 years.

In 1924, the U.S. Post Office Department began to replace these with stamps of the United States overprinted for use in the Canal Zone. It was not until four years later that stamps were prepared by the Bureau of Engraving and Printing in Washington, D.C., with the inscription “Canal Zone” as an integral part of the original design.

Canal Zone stamps were used until 1979 when the territory reverted to Panama under terms of the Torrijos-Carter treaties of 1977.

Special delivery stamps were not among the stamps prepared for use in the Canal Zone. Why? Because the Canal Zone authorities never ordered any. There was no local need because mail within the zone went to post office boxes or general delivery.

For the few times such a stamp was needed for mail addressed beyond the Canal Zone to the United States, local postal authorities seem to have maintained a small stock of U.S. special delivery stamps. This practice dated back to at least 1938, according to the Canal Zone Study Group.

In 1954, the Canal Zone authorities temporarily discontinued the sale of U.S. special delivery stamps on the advice of auditors. During this time, Canal Zone stamps hand overprinted “Special Delivery” were used.