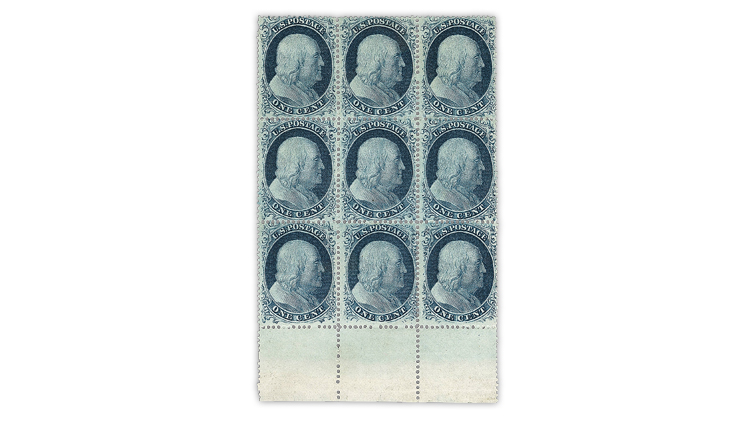 The May 8-9 auction of United States stamp multiples from the William H. Gross collection will include this original gum perforated block of nine of the 1857 1¢ blue Benjamin Franklin from plate 2, which contains a sound mint example of the type III stamp 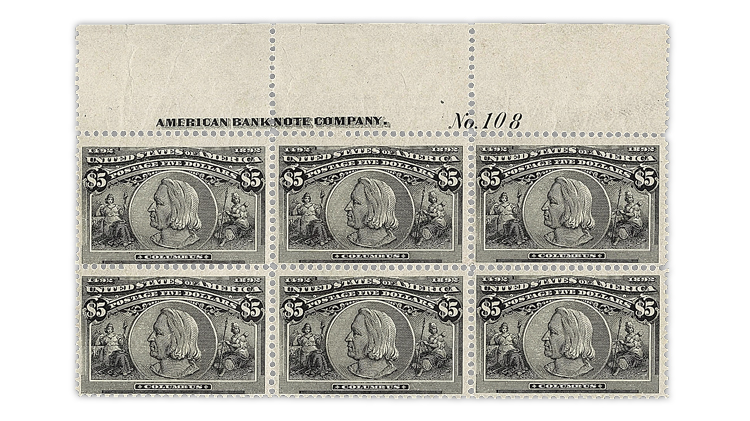 The public auction series offering material from the William H. Gross collection of the United States continues May 8-9 with a sale specifically devoted to stamp multiples.

The auction series is presented by Charles F. Shreve and Tracy L. Carey in association with Robert A. Siegel Auction Galleries, but this particular sale will take place on the premises of the Collectors Club at 22 E. 35th St. in New York City. Prospective attendees are asked to telephone the Siegel firm in advance to reserve a seat in the salesroom.

The auction opens with an intact sheet of 12 of the 1846 gray black Providence, R.I., postmaster’s provisional stamp (Scott 10X2a) in mint never-hinged condition, and continues with an unused sheet margin block of four of the 1847 5¢ Benjamin Franklin in dark brown (1a), and a strip of eight of the same stamp in orange brown (1b).

The 237-page hardcover auction catalog for this sale carefully identifies each item with a high resolution color illustration and description; the provenance, which usually lists some of the most recognizable names in the history of U.S. stamp collecting; census, literature and exhibition references; certification; condition notes; the 2019 Scott catalog value; and for many items, a history summary and additional commentary.

The description for lot 32 in the auction begins, “This magnificent original-gum block of the 1¢ 1857 issue from Plate 2 contains the finer of two extant unused examples of Position 99R2 in perforated form.”

Specialized Catalogue of United States Stamps and Covers to distinguish it from the other 1¢ blue type III stamps identified as Scott 21.

This specific block of nine stamps is listed in the Scott catalog with a value of $110,000, typeset in italics to signify that it is difficult to value accurately. Siegel notes that the catalog value for the block is unchanged since 1994.

One of the more outstanding plate blocks in an auction liberally populated with them is the $5 black Columbian in a unique top plate block of six, described by Siegel as “one of the most important of all United States plate blocks.”

This auction continues with material extending into the 20th century and adds back-of-the-book airmails, special delivery stamps, postage dues and much more.

It is the second auction in a planned series of four that began in 2018 with the Oct. 3 United States Treasures sale, which grossed more than $10 million in a single day.

The proceeds from that auction and the upcoming sale will benefit charitable organizations through the William, Jeff and Jennifer Gross Family Foundation.

The hardcover catalog can be ordered through the Siegel website at www.siegelauctions.com. It can be downloaded from the same site as a PDF document, and the lots can be browsed individually online, with live internet bidding available through Stamp Auction Network (www.stampauctionnetwork.com).