U.S. Views of Our Planets pane of 16 is in demand 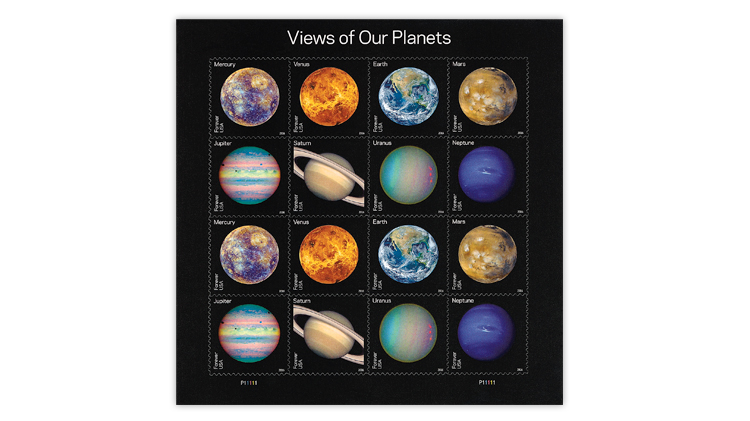 The planets depicted are Mercury, Venus, Earth, Mars, Jupiter, Saturn, Uranus, and Neptune. Pluto, having been demoted to dwarf planet status, did not make the cut. However two Pluto Explored stamps were released in a pane of four at the same time (Scott 5077-5078).

The Views of Our Planets stamps were issued in panes of 16 with two of each stamp in the pane. They were designed by Antonio Alcala and printed by Ashton Potter (USA) Ltd. by lithography. The self-adhesive stamps have gauge 10½ serpentine die cuts.

The stamps were also sold in uncut press sheets of eight panes of 16 stamps.

A mint pane of 16 of the Views of Our Planets stamps has a current postage value of $8.80 and a Scott Specialized Catalogue of United States Stamps and Covers value of $24.

From Me to You forever mint pane of 20 in demand