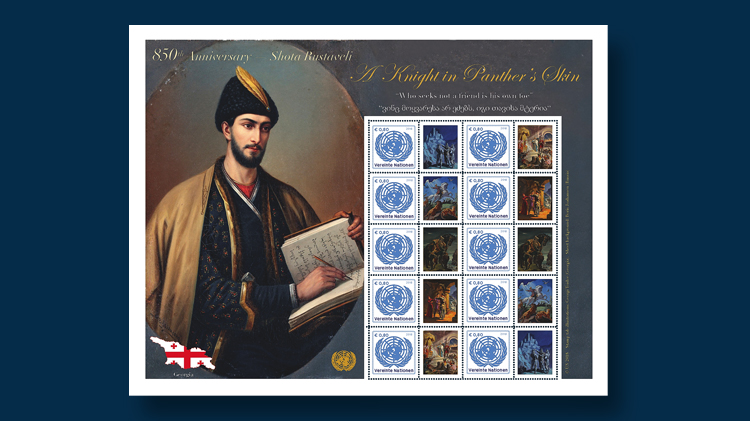 The United National Postal Administration is celebrating Georgia’s national poet Shota Rustaveli and his epic poem A Knight in Panther’s Skin on this pane of 10 stamps with labels to be issued May 26. The stamps show the U.N. emblem, and the labels depict

The United Nations Postal Administration will issue a pane of 10 stamps and 10 labels May 26 honoring Shota Rustaveli, the national poet of the country of Georgia.

According to the UNPA and the inscription in the upper left of the pane, the issue commemorates the 850th anniversary of Rustaveli, who is known for his 12th-century epic poem A Knight in Panther’s Skin.

The issue date May 26 is also Georgia’s Independence Day, marking the creation of the Democratic Republic of Georgia on May 26, 1918.

The stamps are denominated 80¢ for use from the U.N. office at the Vienna International Center in Vienna, Austria.

The stamps depict the U.N. emblem in blue with a 2018 year date in the upper right, and the labels depict five scenes from A Knight in Panther’s Skin as illustrated by Georgian artist Irakli Toidze (1902-85). This poem about chivalry includes more than 1,600 quatrains and 6,000 lines.

A portrait of the poet is pictured in the selvage of the pane of stamps.

According to the inscription to the right of the stamps, this painting by Boris Joahansen is from the Giorgi Leonidze State Museum of Georgian Literature.

Inscribed in English at the top of the selvage is “850th Anniversary of Shota Rustaveli,” “A Knight in Panther’s Skin” in gold, and the quote “Who seeks not a friend is his own foe.” This quote from the poem is written in Georgian below the English version.

Pictured in the lower left in the selvage are the emblems of Georgia in white and red, and the U.N. emblem in gold.

Little is known about Rustaveli, including the exact year of his birth (given in various sources from as early as 1160 to as late as 1172). Other events for his 850th anniversary were held in 2016 and 2017.

For example the British Council in Georgia, in partnership with other organizations, presented a symposium in 2016 for the 450th death anniversary of William Shakespeare and Rustaveli’s 850th anniversary.

The British Council said about the Georgian poet and his famous work: “Even after many centuries, ‘Knight in the Panther’s Skin’ his epic poem, makes an interesting reading for people of all nationalities because of the masterfully presented universal, eternal ideas and humanism. Above all, Rustaveli deserves an honorary place in the world cultural milieu because of the unique artistic quality of his verse. Similarly to works by Shakespeare, Homer and Dante, his epic poem represents the crossroads in the aesthetic development of humankind.”