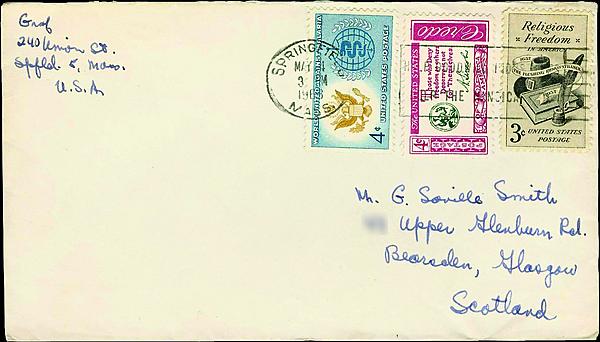 Figure 4. This cover mailed to Scotland May 4, 1963, uses three stamps, including the 4¢ Malaria commemorative, to pay the 11¢ international surface letter rate for mail weighing up to one ounce. 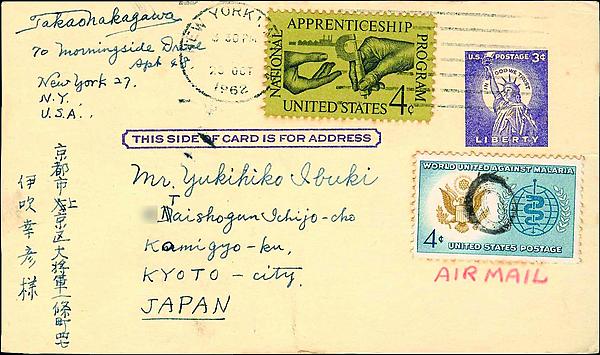 Figure 3. Another 3¢ postal card, mailed to Japan Oct. 25, 1962, is additionally franked with the 4¢ Malaria commemorative stamp and another 4¢ commemorative to pay the 11¢ airmail postal card rate. 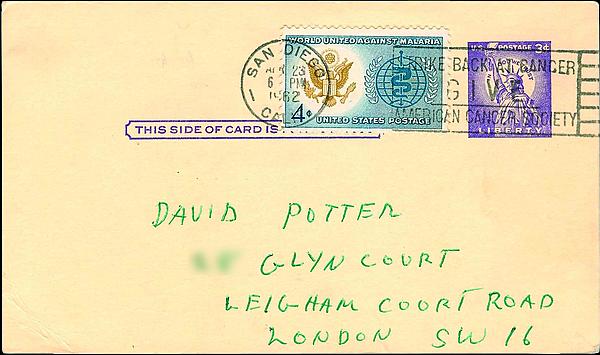 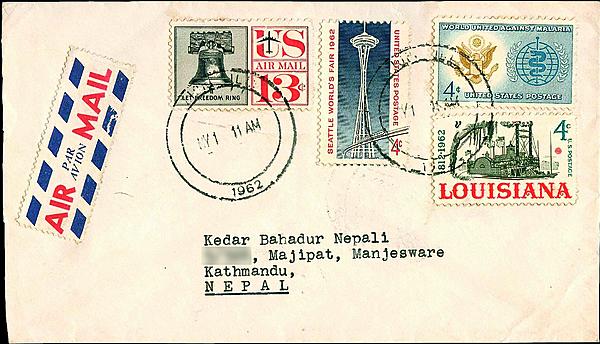 Figure 1. This letter to Nepal was mailed May 1, 1962, at the 25¢ per ½-ounce international airmail letter rate. It is franked with the 4¢ Malaria Eradication stamp and two other 4¢ commemoratives.

In this column I have examples of the same stamp used on mail to foreign countries.

International commercial uses of modern material are particularly difficult to locate because they have to be retrieved from overseas. Foreign dealers think even less of this material than do dealers in the United States, and thus they do not attempt to acquire, save and sell it.

The varied types of international uses located by the first-day cover collector introduced in my previous column are particularly interesting.

The destination uses he found include covers to exotic destinations such as the Central African Republic, Ghana and, as shown in Figure 1, Nepal.

This up-to-½-ounce letter to Nepal was mailed May 1, 1962, at the 25¢ per ½-ounce international airmail letter rate. In addition to the 4¢ Malaria Eradication stamp issued that same year on March 30, the cover is also franked with the 4¢ Space Needle commemorative (Scott 1196), the 4¢ Louisiana Statehood commemorative (Scott 1197), and the 13¢ 1961 Liberty airmail stamp (Scott C62), totaling the 25¢ airmail postage due.

A third nice usage is shown in Figure 3, on the same type of 3¢ Statue of Liberty postal card, used Oct. 25, 1962. This time the postal card is additionally franked with the 4¢ Malaria commemorative as well as the 4¢ 1962 Apprenticeship commemorative (Scott 1201). These together pay the 11¢ airmail postal card postage to all countries, including Japan.

Figure 4 shows an example of the up-to-one-ounce international surface letter rate to all countries; in this case to Scotland.

In this set of covers franked with the 4¢ Malaria Eradication stamp we see a wonderful variety of four different international commercial usages.

The collection of international commercial usages of this stamp includes many other superb examples not shown here, such as an airmail letter from American Samoa to New Zealand, and a special delivery letter to Canada.

Altogether, the FDC collector of this stamp has certainly met the imposing requirement of showing a wide variety of commercial uses of his stamp.