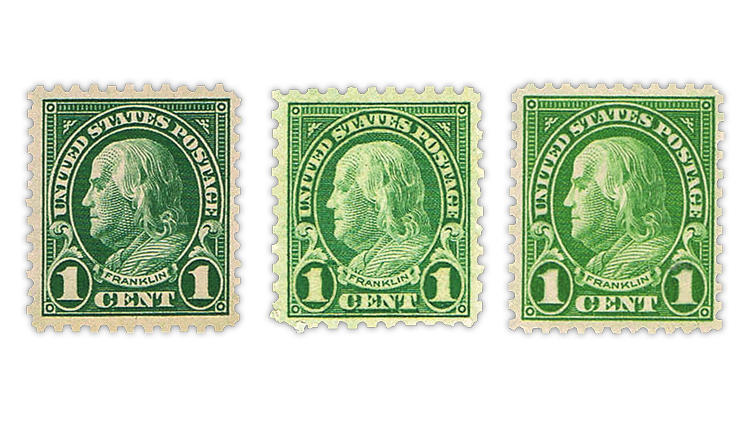 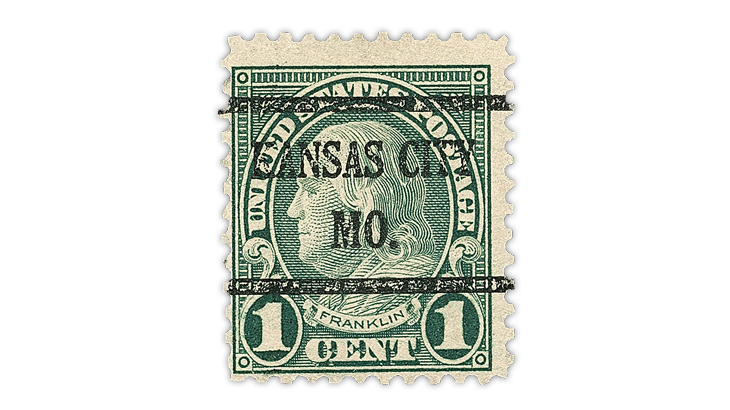 Figure 2. A genuine example of Scott 596, the 1¢ green Fourth Bureau Issue rotary press sheet waste stamp, should always have a certificate of authenticity when offered for sale. Image courtesy of Robert A. Siegel Auction Galleries. 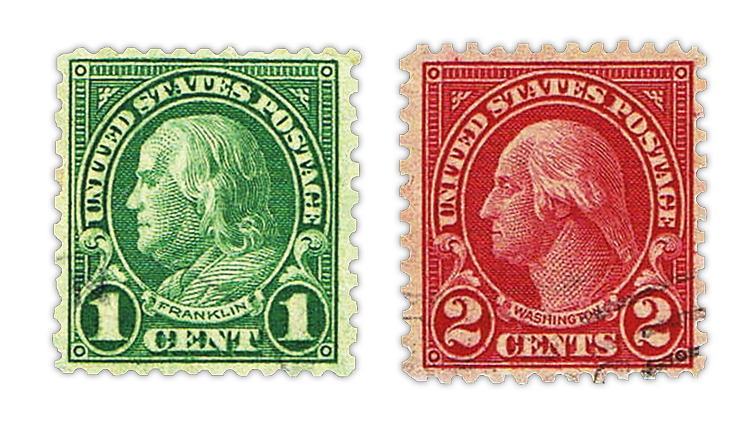 Figure 3. Coil waste issues such as these used examples of Scott 594 and 595, the Fourth Bureau Issue 1¢ and 2¢ perf 11, differ in size from the routinely seen examples shown in Figure 1.
Previous
Next

If there is a pair of stamps more often misdescribed in expertizing requests than any other, it is probably the 1¢ green Benjamin Franklin and 2¢ carmine George Washington stamps of the 1922-38 Fourth Bureau Issue.

These 1¢ and 2¢ stamps are sometimes offered as something they are not on internet sales sites. I have seen some examples offered for quite a lot of money with no Scott catalog number included and with descriptions as vague as “rare.” However, the stamps shown with these offers are not rare, and do not have catalog values in the thousands of dollars.

There are indeed some rarities among these issues. The most expensive is Scott 596, which is described in the Scott Specialized Catalogue of United States Stamps and Covers as “rotary press sheet waste” of the 1¢ green. It is only known used and has a catalog value of $200,000 in the 2019 Scott U.S. Specialized. That value is in italics, denoting an item that can be difficult to value accurately.

A cheaper version exists, with a Kansas City, Mo., Bureau precancel and a catalog value of a mere $150,000 (also in italics). Figure 2 shows an example of this stamp that sold in a 2018 Robert A. Siegel Auction Galleries Auction for approximately $190,000.

Any listing of the “waste” versions of the 1¢ and 2¢ Fourth Bureau Issues absolutely must be offered with an expertizing certificate because it is so easy to mistake the normal for the rare.

What is meant by “waste” and how can you identify these stamps? For answers, we have to go backward in the Scott U.S. Specialized catalog to the Third Bureau Issue, the Washington-Franklins, where waste issues first appear (most of the stamps between Scott numbers 538 and 546), and to the explanation in the introduction to the catalog, as follows:

“Coil Waste: an occurrence brought about by stamps issued in perforated sheets from a printing intended for [rotary press-produced] coils. These stamps come from short lengths of paper at the end of the coil run. Sometimes the salvaged sections were those which had been laid aside for mutilation because of some defect. Because the paper had been moistened during printing it sometimes stretched slightly and provided added printing area. Sheets of 70, 100, and 170 are known.”

When these “short lengths of paper at the end of the coil” were reclaimed, they might have already been perforated as perf 10 coils, or not perforated at all. It was a simple matter to add perforations in order to make them usable as sheet stamps.

The key to understanding and identifying the coil waste stamps is that they are rotary printed unlike the first issue (the perf 11s) of this series, which were printed by flat plates.

Again, we need to refer to the Scott U.S. Specialized catalog, which introduces rotary printing with a note before the first rotary printed coil stamps, issued in 1915: “The Rotary Press Stamps are printed from plates that are curved to fit around a cylinder. The curvature produces stamps that are slightly larger, either horizontally or vertically, than those printed from flat plates. Designs for stamps from flat plates measure about 18½-19mm [millimeters] wide by 22mm high.

When searching for these scarce stamps you need to apply a millimeter gauge to any you think are candidates. The “0” line on the gauge goes flush with the start of the design. For Scott 578-579 and 594-595, the measurements that seal the deal are 19¾mm by 22¼mm.

For Scott 596, there are two attributes that point to the rarity.

First is the color, which is darker than the later rotary-printed issue. The source for Scott 596 was the perf 10 rotary-printed sheet issue of 1923. These normally have a measurement of 19¼mm by 22½mm, the same as Scott 596, proving that 596 is sheet waste rather than coil waste.

There is plenty of room for misunderstanding and even some room for trickery with reperfing on these stamps. However, the majority of misidentifications are simple misunderstandings of what to look for combined perhaps with the normal human hope that the owner has stumbled upon something of considerable value.

Indeed, it can happen. But the great majority of requests for authentication fail because the attributes of the submitted stamp are those of the normal stamps of which there are billions in existence.

Again, anyone who thinks they have one of these stamps is well advised to have it expertized to be absolutely certain. And anyone considering buying one should insist on it being certificated before writing the check.