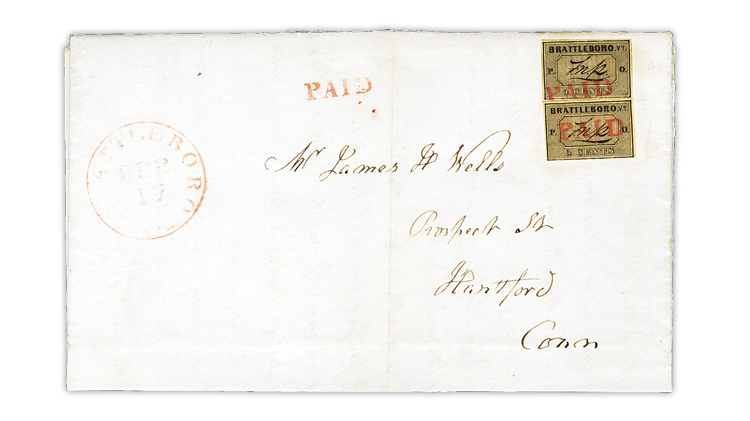 An outstanding American postal history artifact, this letter sheet franked with two examples of the Brattleboro, Vt., postmaster’s 5¢ provisional stamp is the only cover recorded bearing more than one example. It will be offered during the Sept. 17-18 Che

A top rarity from the earliest years of stamp use in the United States is about to be offered at auction.

The famous cover will open the first session of the Sept. 17-18 public auction by Cherrystone Philatelic Auctioneers of New York City.

The two stamps franking the letter sheet are each struck with the red “PAID” straight-line postmark. A third “PAID” strike and a Brattleboro circular datestamp are also on the front of the letter.

With mention of an enclosed letter, the correspondence substantiates the use of the double 5¢ rate for mail exceeding a half-ounce, Cherrystone noted.

The postmasters in several cities and towns, including Brattleboro, issued their own provisional stamps in advance of the 1847 federal issue. Brattleboro postmaster Frederick N. Palmer’s initials appear in the center of each of his engraved stamps.

Because of the tight layout on the 10-subject printing plate, Brattleboro stamps having four margins are the exception, according to Cherrystone.

This cover was last sold at public auction more than 12 years ago. In this Cherrystone sale, it is listed with an estimate of $250,000.

The upcoming auction offers more than 1,500 lots in four sessions, with a worldwide selection of proofs, stamps, postal history, collections and more.

The first session also includes one used example of the 1851 13¢ blue Hawaiian Postage Missionary stamp (Scott 3), repaired at left and upper right but described by Cherrystone as having a very fine, unused appearance.

Among the many items from Poland on offer is a never-hinged very fine left sheet margin example of the 20-groszy Boxing stamp with center inverted from the 1956 Melbourne Olympic Games set (Scott 751a). Only 14 examples of this modern rarity are known to exist, according to Cherrystone.

Collectors will find many items offered from the British Commonwealth, France and French colonies, Italian states and colonies, Russia and much more.

Lots from the upcoming auction can be viewed on the Cherrystone website, with online bidding available.