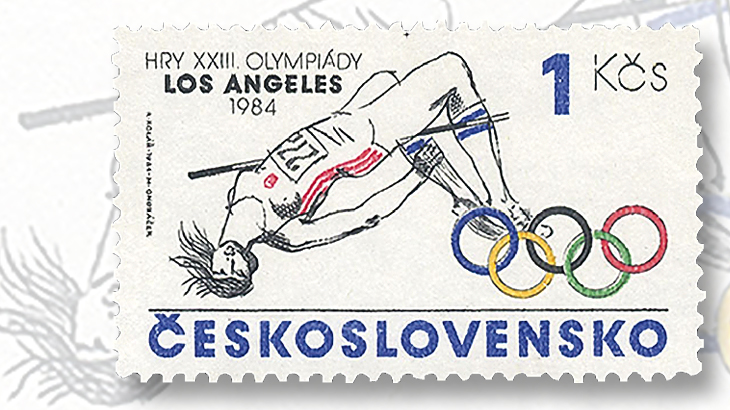 Czechoslovakia printed but withdrew a set of stamps for the 1984 Summer Olympic in Los Angeles with a “Los Angeles” inscription in black. The stamps were destroyed, but 17 to 18 examples of the 1-koruna survived. This one is being offered at the Cherrysto 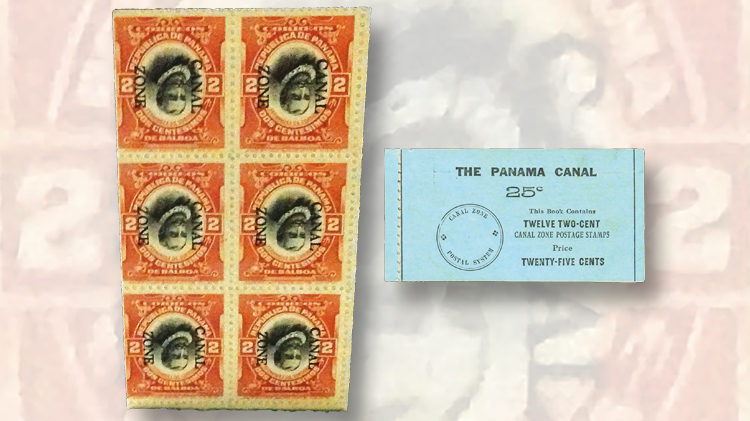 A 1912 Canal Zone booklet of 12 2¢ stamps containing two panes with the centers inverted. Described as unique, the intact booklet will be offered during the Sept. 13-14 Cherrystone auction.
Previous
Next

Cherrystone Philatelic Auctioneers will present a two-day sale of United States and worldwide stamps and covers, proofs, large lots, and collections. The auction will take place Sept. 13-14 at the Cherrystone galleries in New York City.

The U.S. classics on offer include an unused 1867 90¢ blue George Washington stamp with F grill (Scott 101), centered slightly to bottom, according to Cherrystone, but described as a fine, sound example with beautiful color. The auction firm’s estimated net realization for this stamp is $7,000.

A single 4¢ blue error of color stamp from the 1893 Columbian Exposition set (Scott 233a) also is set to be auctioned.

“The 4¢ Columbian color error was caused by the use of a wrong batch of ink,” Cherrystone explains, “and spectrographic analysis has shown that the blue inks of the 4¢ error and 1¢ Columbian have the same components.”

The 4¢ stamp was normally issued in ultramarine, a distinct color from the blue color error.

The estimated net realization for the Columbian color error is $6,000.

A postmarked example of the scarce 1923 rotary press printing of the 1¢ green Benjamin Franklin stamp with gauge-11 perforations (Scott 594, processed from coil waste) is being offered with a 2016 certificate from Professional Stamp Experts. With better centering than most known examples, this stamp is offered with an estimate net realization of $11,000.

A particularly intriguing error is also being offered from the Canal Zone, a U.S. possession in 1912 when the 2¢ orange-vermilion and black Fernandez de Cordoba stamp was issued in a handmade booklet with two panes of six stamps .

This auction includes what Cherrystone describes as “the unique unexploded booklet containing two booklet panes of six, perforated margins, both panes with center inverted and overprint reading down.”

Booklet panes of six of the inverted stamps alone (Scott 39f) are valued at $8,000 in the Scott Specialized Catalogue of United States Stamps and Covers, with the dollar value rendered in italics to denote an item that can be difficult to value accurately.

With two such panes in the offered booklet, the lot is listed by Cherrystone with an estimated net realization of $15,000.

The cover of the Cherrystone auction catalog pictures another unusual stamp, this one from Falkland Islands, and one of just 17 known.

It’s the 6-penny stamp from the 1964 50th anniversary set commemorating the Battle of the Falkland Islands between the British and German navies. Three stamps in the set show different British ships, and the 6d normally shows HMS Kent.

However, the rare variety somehow was printed with the black vignette showing HMS Glasgow, the craft that normally appears on the 2½d stamp from the same set.

The mint stamp (Scott 151a) is listed as a minor variety in the Scott Standard Postage Stamp Catalogue, with a value of $32,500, again printed in italics.

The estimated net realization for the example in the Cherrystone auction is $25,000.

A rare unissued stamp from Czechoslovakia is making an appearance in the Cherrystone auction. Plans for the country to commemorate the 1984 Olympic Summer Games in Los Angeles fell through when the Soviet Union initiated a boycott of the Games, and Czechoslovakia followed suit. A set of four stamps was issued (Scott 2527-2530), but the stamps with the “Los Angeles” inscription were withdrawn and mostly destroyed.

Some 17-18 examples of the 1-koruna stamp with the inscription are known to exist, all unused but without gum.

The stamp is not listed in the Scott Standard catalog, but it is found in the 2017 edition of the Yvert & Tellier Timbres d’Europe, Vol. 5, with a value of €7,500 (approximately $8,805). Cherrystone is listing the stamp with an estimated net realization of $1,500.

The Cherrystone auction has a strong representation of items from Colombia, Poland, and Russia, but there are some 1,545 lots from all over the world, plus another 140 or so large lots and collections .