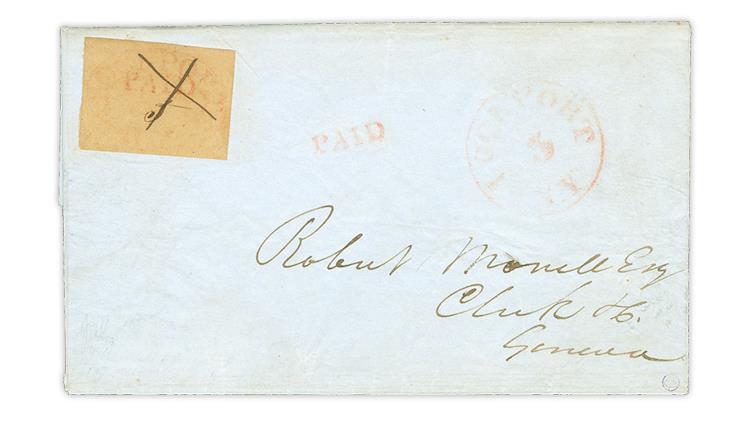 The only known example of a complete Lockport, N.Y., 5¢ postmaster’s provisional stamp is on this 1846 cover mailed to Geneva, N.Y. H.R. Harmer will auction this important American rarity during its Aug. 6-7 sale series, which also includes the Julian Cab 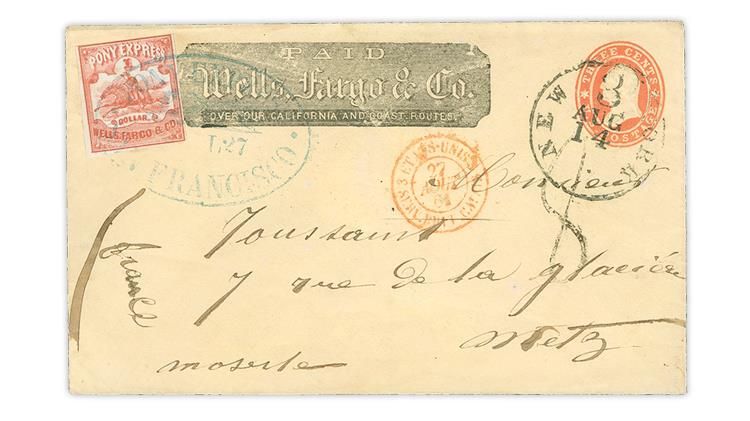 A vibrant Pony Express cover to France, the only one known, is offered to collectors as part of the H.R. Harmer auction of the Erivan collection. 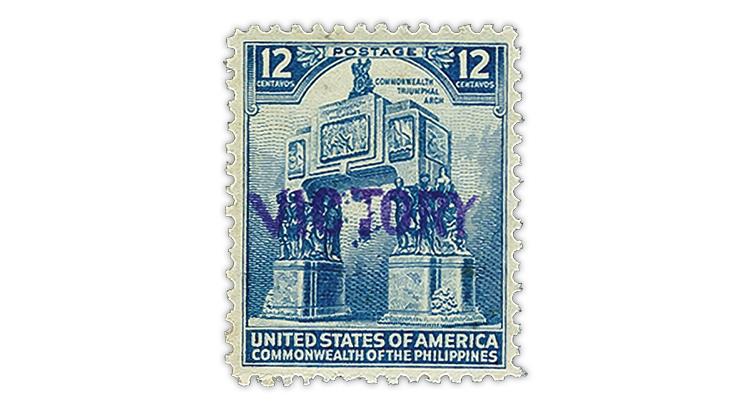 An unused example of the 12-centavo bright blue Triumphal Arch stamp from the Philippines Victory overprint issue of 1944, offered in the H.R. Harmer auction of the Cabarrus collection. 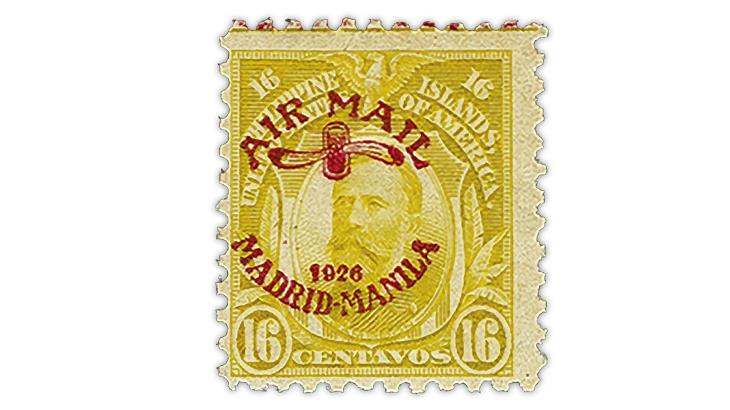 Friday at 10 a.m., the firm will offer the Julian Cabarrus collection of the Philippines, followed at 3:30 p.m. by part 3 of the Erivan collection of United States and Confederate States.

The last sale offers items from the collection of Erivan Haub (1932-2018), the German-born worldwide collector and retail business leader whose substantial philatelic holdings are being dispersed in a series of sales that began in spring 2019 and will continue into 2023.

The Erivan collection is being auctioned by H.R. Harmer in the United States, Corinphila Auctions in Switzerland and the Heinrich Koehler auction house in Germany.

The current Erivan sale offers the only complete example of the 1846 5¢ red on buff postmaster’s provisional stamp from Lockport, N.Y. (Scott 6X1).

The stamp is made up of individual strikes of a Lockport, N.Y., oval in red and a straightline “PAID” in red, plus a manuscript “5” added in black.

It is canceled by a neat black manuscript “X.”

As the Scott Specialized Catalogue of United States Stamps and Covers explains: “One example of No. 6X1 is known. Small fragments of two other stamps adhering to one cover also exist.”

That cover bearing the fragments is being offered separately in this H.R. Harmer sale.

The folded letter franked with the intact stamp was reused after mailing, returning it to Lockport. It was discovered near the end of the 19th century by a collector named M.H. Hoover.

“Hoover traded the Lockport provisional cover to the Scott Stamp & Coin Company, who immediately placed it with Count [Philipp la Renotiere von] Ferrary,” the auction lot description explains. “The Lockport cover sold for the equivalent of $8,000 on April 7, 1922; the buyer was Arthur Hind, upon whose death the cover was purchased by Warren H. Colson for Alfred H. Caspary. From Caspary the cover sold to Josiah K. Lilly, then to John R. Boker, Jr., thus completing its tour of arguably the five most important stamp collections of the 20th Century. Its last appearance at public auction was in the 1989 Christie’s sale of the Weill Brothers’ stock, where it was purchased by Mr. Erivan Haub.”

The unique complete stamp on its folded letter carries a value of $300,000 in the Scott U.S. Specialized catalog. It is listed in the H.R. Harmer sale with a starting price of $100,000.

“In the century and a quarter since its discovery, the Lockport provisional has been featured in Stamps of Fame (L.N. and M. Williams, 1949), Life magazine’s “World’s Rarest Stamps” (1954), Philatelic Gems (Linn’s, 1984), and many other publications,” H.R. Harmer notes.

The cover bearing the stamp fragments is a folded letter sheet with two pieces of coarse buff paper attached by adhesive wafers at upper left.

Another exciting cover in the Erivan collection sale was mailed a little over 15 years after the Lockport cover, but has its own claim to uniquity as the only known Pony Express cover delivered to France.

Mailed July 27, 1861, to Metz, France, the cover is franked with the $1 red Pony Express stamp (Scott 143L3) on a 3¢ Star Die envelope (U27). It is described as one of only six Pony Express covers mailed to a foreign destination, one of five to Europe, one of four with Pony Express adhesives, and the unique cover to France.

It was rated in black crayon for 8 decimes postage due upon its arrival in France, having traveled aboard the Cunard steamship Africa. It is struck with a red arrival circular datestamp on the front, and with a black Paris transit marking and a black Metz arrival marking (both on the reverse).

The cover possesses an overall vibrance, according to H.R. Harmer, “that is remarkable when one considers the inter-continental journey this cover made over a century and a half ago.”

Like the Lockport cover, bidding on this Pony Express cover to France begins at $100,000.

The Cabarrus collection of the Philippines presents 421 lots of stamps and covers in the auction at the H.R. Harmer offices, and an additional 400 lots that will be offered on the same day through online and mail bidding only.

The sale opens with four stampless covers to Cadiz from the 1840s and 1850s before offering the first stamps of the 1854 series, including an unused 5-cuarto orange Queen Isabella II stamp (Scott 1) with large to just clear margins.

Dozens of lots feature stamps and stamps on cover from the 1944 Victory overprints. Included is a key stamp, the 12-centavo bright blue Triumphal Arch (Scott 476), of which 36 were produced and 25 are recorded. With a $7,000 Scott catalog value, bidding for the stamp starts at $4,000.

The airmail overprints are also well represented in this sale. An example of the 1926 16c olive bister airmail stamp with red overprint (Scott C8) is present with full original gum (plus hinge remnant), one of only 100 stamps issued. The Scott catalog value is $5,000, and the starting bid is set at $1,500.