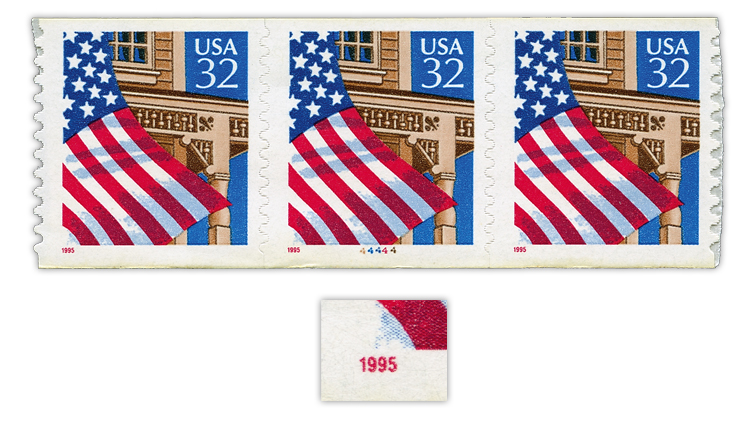 A strip of three unissued Flag Over Porch coil stamps dated “1995” with plate No. 44444 and die cuts that gauge 10.9. Apparently these stamps were provided to a firm that was testing self-adhesive coil stamps for the printer.

Sometimes even the experts overlook the smallest of details that make the biggest difference to the story.

A case in point was the subject of my Philatelic Foreword column in the Feb. 15, 2021, issue of Linn’s about the American Philatelic Expertizing Service (APEX) issuing a certificate for a strip of three Flag Over Porch stamps on Nov. 19, 2020.

At the time I wrote that column, all I had to work from was a low-resolution scan. My focus, and that of other coil collectors, was on the plate number and how it wasn’t known with this type of die cut on the 1996 coil.

Fast-forward to late April when out of the blue I received a call from the collector who owns the strip.

The collector, who requested to remain anonymous, was unaware of the earlier Linn’s article but told me to look closer at the stamp’s printed date.

I requested a better scan, and one was emailed to me. Sure enough. The printed date was 1995. Just to be 100 percent certain, I asked that the strip of three be sent to Linn’s offices in Sidney, Ohio, and it was.

A scan of the strip and a close-up of the year date are pictured here.

During our phone conversation, I asked point-blank how he came to possess such an item. After a pause, he explained that in 1995 he worked for a company that did testing for the Bureau of Engraving and Printing, back when the BEP was testing self-adhesive coil stamp production.

The BEP provided the company with a large quantity of coils for testing. After testing was completed and the coils were returned, one full roll was found under a shelf. Twenty-six years later, after a recent retirement, the individual who had the roll in his possession removed a strip of three and submitted it to APEX for certification.

Why a strip of three? Because that was the width of the plastic mount provided with the APEX certification form.

The source of the coil indicated that the other 97 stamps are still intact.

Many questions remain, and I plan to continue researching this. One theory I have about the year date is that the plate used to print the water-activated Flag Over Porch coil stamp (Scott 2913) was used to print the design on self-adhesive paper, and that product was sent to the company for testing.

But the big question is, how will we handle this in the Scott catalog? A final decision hasn’t been made, and we still have time to sort things out before the publication deadline of the 2022 Scott Specialized Catalogue of United States Stamps and Covers.

I am confident we will not list this in the postage stamp section of the catalog because there is no evidence these stamps were ever officially issued. Look to the unissued 1998 nondenominated Yellow Hat postcard-rate stamp for precedence.

This find also might send collectors hunting for others, but because more than 25 years have passed and no one has reported finding a similar stamp (in this well-researched and flyspecked issue), I have my doubts that any will turn up.