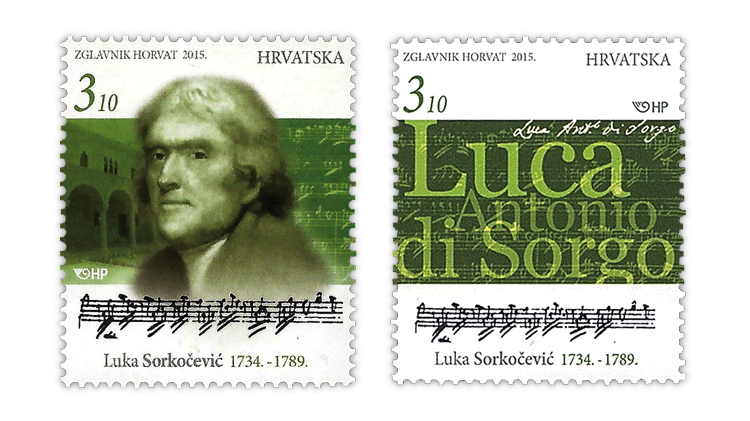 In 2015, Croatia printed a commemorative stamp that was supposed to honor composer Luka Sorkocevic but instead showed Thomas Jefferson (left). The new stamp was redesigned and issued April 21, 2015 (right).

In a case of mistaken identity, Thomas Jefferson was pictured on a Croatian stamp in place of a composer. Fortunately, the error was discovered before the stamp was issued, but not before a few examples had been sold at a local post office.

This 3.10-kuna stamp paying tribute to 18th-century Croatian composer Luka Sorkocevic was redesigned and issued April 21, 2015 (Scott 949), along with two other stamps in the Famous Croats series. It is shown nearby along with the unissued stamp that depicts Jefferson.

After the Jefferson-design error was brought to Linn’s attention, we contacted the Croatian post office, Hrvatska Posta, which confirmed the mistake.

The Hrvatska Posta spokesperson told Linn’s that even though the design error was noticed before the April 21 issue date, 22 of the stamps picturing Jefferson had already been sold in one Dalmatian post office.

The spokesperson added: “The rest of the issue was destroyed and new stamps were printed, showing Sorkocevic’s notes and signature.

“Since the stamp with [the] error was never registered with the World [Universal] Postal Union it is not recognized as an official Croatian Post’s issue.”

A few of unissued stamps have surfaced, including one offered in a 2017 auction by the Croatian auction house Barac & Pervan Ltd. The stamp was featured on the cover of the firm’s Dec. 2, 2017, auction catalog, and sold for approximately €2,300 (U.S. $2,600), including the 18.75 percent buyer’s premium.

Branko Stanicic, who told Linn’s about the unissued stamp, said that there are reports of examples selling privately for almost double that auction realization.

How Jefferson came to be shown on the stamp instead of Sorkocevic is not known. However the two men were contemporaries — Jefferson lived from 1743 to 1826 and Sorkocevic from 1734 to 1789 — and, in some works of art, they appear to have had a passing resemblance to each other.

In fact, an internet search of portraits of Sorkocevic will yield some results showing the same Jefferson portrait that was pictured on the unissued stamp.

According to the website of the White House Historical Association (www.whitehousehistory.org), the portrait of Jefferson was painted by Rembrandt Peale in late January 1805.

The website said: “At the peak of his popularity and with the knowledge that he had won a landslide victory for reelection, Jefferson posed for this formal portrait in a somewhat unconventional manner with his hair not dressed and covering his red coat with a large, fur-lined cape.”

Hrvatska Posta is attempting to stop such errors in stamp design in the future.

The spokesperson said: “After this, several measures have been introduced to prevent such omissions. Additional controls are carried out prior to the design approval, and since then it is no longer possible to buy a stamp before the issue date.”

Thanks to Stanicic for providing information for this report.