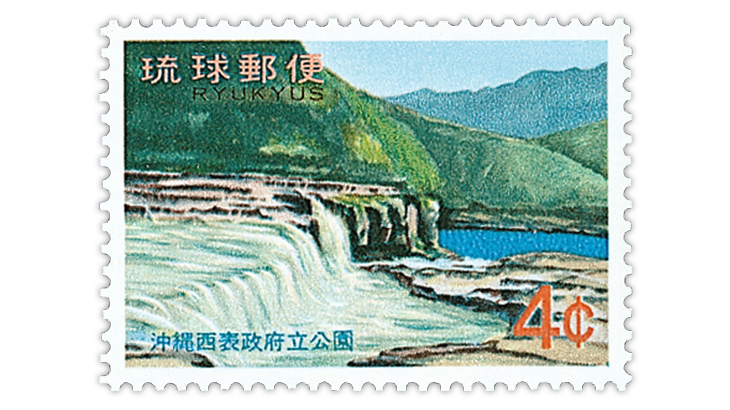 The Ryukyu Islands unissued 1971 4¢ Iriomote Park stamp, which was used as a validating label on Ryukyu Islands Emergency Conversion Confirmation certificates, is hard to find and a good buy at a high percentage of the Scott Specialized Catalogue of Unite

The Ryukyu Islands are a chain of islands in the Pacific Ocean that stretch between the Japanese home island of Kyushu and the island of Taiwan.

The largest island in the group, Okinawa, was the scene of the bloodiest battle in the Pacific Theater in World War II. In two months and three weeks of bitter and vicious fighting from April 1 to June 22, 1945, United States casualties numbered approximately 14,000 dead and 21,000 wounded, and about 110,000 Japanese military personnel were killed. As many as 100,000 Okinawan civilians also died in the battle.

After the war, the U.S. military occupied Okinawa until 1950.

In 1950 the United States Civil Administration of the Ryukyu Islands took over administering the islands until they were returned to Japan in 1972.

Many collectors of U.S. stamps also collect Ryukyu Islands stamps issued under the U.S. administration. These stamps are also popular with collectors who were stationed on the islands during military or civilian service.

A Ryukyu Islands 4¢ Iriomote Park stamp was prepared for postage in 1971 but was not issued. It was repurposed as a validating label used on Ryukyu Islands Emergency Conversion Confirmation certificates.

The stamp is not listed in the Scott Specialized Catalogue of United States Stamps and Covers, but it is noted and valued at $175 in unused condition and $225 on document.

This is not an easy stamp to find either unused or on document. It is a good buy at a high percentage of Scott catalog value.