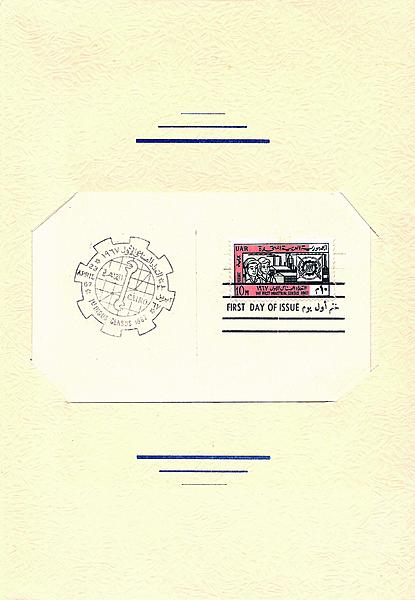 Figure 6. The first-day-of-issue-card for the United Arab Republic’s First Industrial Census stamp was inserted inside the folder shown in Figure 5. 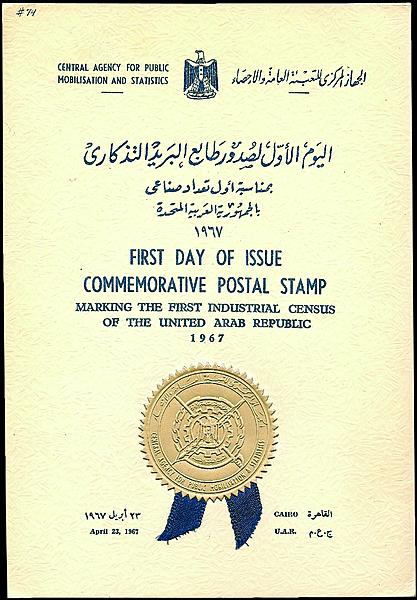 Figure 5. The front of the folder that contains the first-day-of-issue card shown in Figure 4. 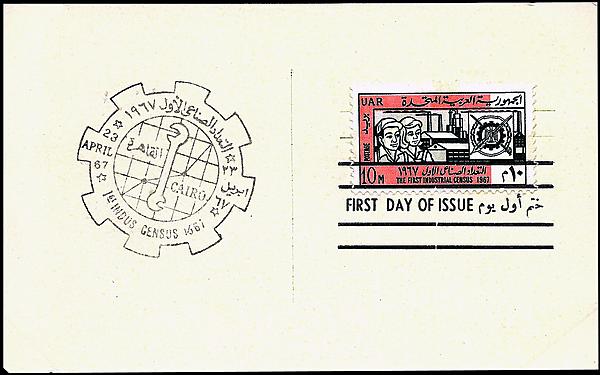 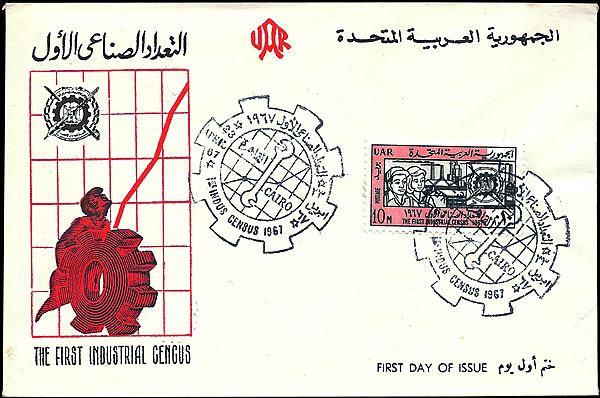 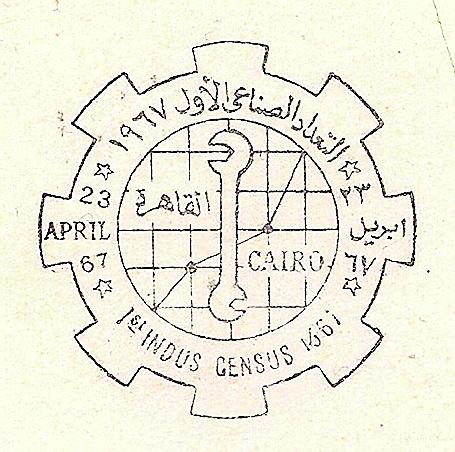 Figure 2. The first-day cancel for the United Arab Republic’s First Industrial Census stamp is shaped like an industrial wheel. 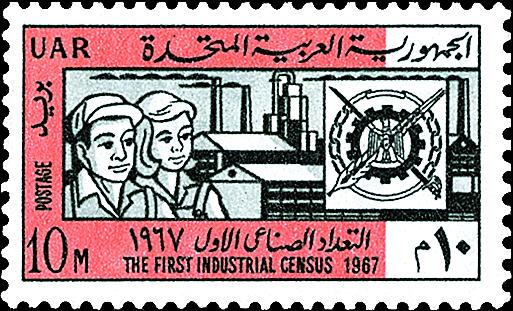 When it was formed in 1958, the United Arab Republic combined the countries of Syria and Egypt. However, this union only lasted until 1961, when Syria decided to back out and become its own nation again.

Egypt, however, continued to call itself the United Arab Republic until 1971. As of Sept. 28, 1971, the country began officially using the name Arab Republic of Egypt on its stamps, starting with Scott 872.

The central design is shifted to the right. Shown on the far left are a man and a woman representing workers. Continuing to the right, a factory is shown next followed by the emblem of the Central Agency for Public Mobilization and Statistics.

The emblem, as depicted on the stamp, consists of the national coat of arms in the center of an industrial wheel. Pictured around the wheel is the outline of a chain with a sword and a strand of wheat intersecting each other. There is no text.

Inscribed above the design on the stamp is the name of the country “United Arab Republic” spelled out in Arabic. The county’s initials “UAR” are in the upper left corner.

Below the “UAR” is the Arabic word for postage, reading down. Below that is the same word in English, reading up.

Inscribed at the bottom of the stamp is “The First Industrial Census 1967” in both English and Arabic in the center with the currency and denomination in the corners, English at left and Arabic at right.

The Postal Printing House in Cairo printed this commemorative by photogravure on watermarked paper. The watermark is listed in Scott as No. 342 and contains the coat of arms of the United Arab Republic.

The black, gray and orange stamp is printed on white paper. It is perforated gauge 11½ by 11.

A total of 2 million stamps were issued.

Figure 2 shows the first-day cancel created for the occasion. Shaped like an industrial wheel, it has a two-headed wrench in the center superimposed on a grid with connected points. “Cairo” is written in English at lower right and in Arabic at upper left.

Around the rim of the wheel is the issue date, April 23, 1967, in English at left and Arabic at right.

Above the bilingual date is the Arabic for “First Industrial Census 1967.” Below the date is “1st Indus Census 1967.” The word “industrial” is written out in Arabic, while its English equivalent is abbreviated to “indus.”

The text and the date are separated by starlike characters.

The first-day cover illustrated in Figure 3 bears the stamp and is struck with two first-day cancels.

At top right on the cover is the name of the country in Arabic. At bottom right are the words “First Day of Issue” and the Arabic equivalent of “First Day Cancellation.”

At top center are the initials of the country, written out in a stylistic form.

On the left side of the FDC is the cachet showing the Central Agency for Public Mobilization and Statistics emblem with illegible text, a picture of a worker and an industrial wheel, as well as a graph indicating that industrial growth is increasing.

The FDC retails for about $5.

A first-day-of-issue card also is known. The front of the card, shown in Figure 4, is divided into two sections.

The right-hand section of the card contains the stamp affixed to the card with a four-line cancellation that reads “First Day of Issue” and Arabic for “First Day Cancellation.”

The left half contains the first-day cancel. The back of the card is blank.

The card comes in what appears to be a first-day-of-issue folder made of a large folded beige cardstock.

The attractive front folder page is pictured in Figure 5. At top center is the national coat of arms flanked by “Central Agency for Public Mobilisation and Statistics,” in Arabic at right and in English at left.

Below it is “First Day of Issue Commemorative Postal Stamp Marking the First Industrial Census of the United Arab Republic 1967” in Arabic and in English.

A rouletted circular aluminum foil seal of the Central Agency for Public Mobilization and Statistics emblem is in the lower center area of the folder cover.

The seal contains bilingual text. The legible words are around the emblem and read, “Central Agency for Public Mobilisation and Statistics,” in English in the bottom half and in Arabic in the upper half.

The bronze seal is embossed and has two blue ribbon strands at the bottom. Written in English and Arabic at the bottom right of the folder are “Cairo” and “U.A.R.” and the date “April 23, 1967” at bottom left.

Figure 6 pictures the inside front page of the folder, which has four diagonal slits to hold in place the first-day-of-issue card, much like a certificate is held inside a jacket. Above and below the card are blue lines of various thicknesses.

The Arabic and English texts on the inside of the back folder page explain the importance of industry to the country and the purpose of having an industrial census.

A table on the back of the folder lists the main items created through the industrial production of the United Arab Republic from 1952 to 1966.

A scarce variety of this stamp exists with the central background color white instead of gray. This variety is worth at least $40 as opposed to the 40¢ value of the regularly issued stamp.

I know collectors who like to collect this stamp in all of its forms, including mint and used stamps, commercial and philatelic covers, and FDCs. However, many of these collections lack the stamp variety, the first-day-of-issue card and the folder that contains it.

Years ago, I saw the best group of philatelic covers for this stamp. The owner was proud to show me the collection. It contained covers, each franked with either a single stamp or a number of stamps, including pairs, strips of three and blocks of four.

Some of these covers went through the mail. Others did not; they just received a post office cancellation. Also, some covers have an addressee, others don’t.

Because of the importance of industry and its direct impact on the overall economy of the country, the Egyptian government felt that it needed to create an industrial census of the items produced nationally in order to conduct an economic analysis of commodities and production estimates.

About 150,000 industrial businesses were included in this census, which compared industrial production and growth. For example, the census concluded that a number of main areas of production for this country had tremendous growth between 1952 and 1966. These areas included petroleum products, iron and steel products, metal structures, fertilizers, insecticides, drugs and cosmetics, generated electricity, cotton textiles, cotton yarn and wool textiles.

This stamp served as a form of acknowledgment by the government of the value of national industrial statistics.

Egypt is a popular country to collect. It has many followers inside the country and internationally. To this country that produces beautiful stamps, I wish its citizens peace and comfort during these troubling times.