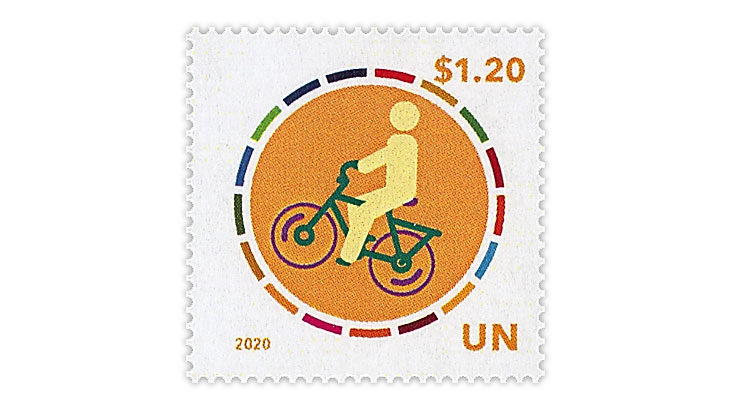 The United Nations post office at the Palais des Nations in Geneva, Switzerland, will commemorate World Bicycle Day with a pane of 10 1.50fr stamps on June 3. A previous U.N. bicycle stamp (Scott 1237c) from the May 27, 2020, Climate Action pane is shown.

The United Nations Postal Administration revealed its 2022 stamp program in its bulletin for collectors, Fascination (issue No. 136).

The subjects include endangered species, the planet Mars, and World Bicycle Day.

The program will begin Jan. 14 with the Sport for Peace issue in honor of the upcoming Beijing Winter Olympic Games. The issue will include six stamps: 58¢ and $1.30 for use from the post office at U.N. headquarters in New York City; 1 franc and 2fr for the Palais des Nations in Geneva, Switzerland; and €0.85 and €1.80 for the Vienna International Center in Vienna, Austria. The stamps will be in six panes of six each.

The XXIV Olympic Winter Games will take place Feb. 4 through Feb. 20, 2022. The 2022 Paralympic Games will follow from March 3 through March 13, also in Beijing.

Because of the COVID-19 pandemic, this is the first time since 1992 that the Summer And Winter Games will be held within six months of one another; 1992 marked the end of the Summer and Winter Games occurring during the same year.

The UNPA 2022 program continues on Jan. 21 with a pane of 10 $1.30 stamps with labels celebrating the Year of the Tiger. This is the 12th pane in UNPA’s Chinese Lunar Calendar series.

On Feb. 14, the UNPA will issue another pane of 10 $1.30 stamps with labels. This pane has the title “#trollsfoodheroes.” The title matches the format used on the social media platform Twitter.

The Food and Agriculture Organization of the United Nations designated 2021 as the International Year of Fruits and Vegetables, and the organization teamed up with the animation studio DreamWorks, which released the feature film Trolls in 2016, to help promote healthy eating and a reduction of food waste.

This collaborative campaign will continue into 2022 with the stamp issue, as well as a featured video at the World Expo in Dubai and an educational program with over 40,000 teachers through the U.N. foundation, according to the Food and Agriculture Organization.

On March 18, the UNPA will issue stamps in its Endangered Species series. This long-running series began in 1993. The new set will include $1.30, 1.50fr and €1 stamps in three panes of 16 with four designs per pane.

As the founder of the Green Belt Movement, a nongovernmental organization dealing with environmental issues and women’s rights, Maathai won the Nobel Peace Prize in 2004, becoming the first African woman to do so.

According to the United Nations: “World Bicycle Day draws attention to the benefits of using the bicycle — a simple, affordable, clean and environmentally fit sustainable means of transportation. The bicycle contributes to cleaner air and less congestion and makes education, health care and other social services more accessible to the most vulnerable populations.”

A pane of 10 €1 stamps with labels on July 20 will celebrate World Chess Day.

“Chess is one of the most ancient, intellectual and cultural games, with a combination of sport, scientific thinking and elements of art,” says a page dedicated to World Chess Day on the U.N. website. “As an affordable and inclusive activity, it can be exercised anywhere and played by all, across the barriers of language, age, gender, physical ability or social status.”

The U.N. website adds that despite recent health and safety protocols “chess has demonstrated remarkable resilience, adaptability and a very strong convening power.”

The website says that recently “the overall interest in chess is reported to have doubled, with more players than ever coming together to participate in chess events that are being increasingly held through online platforms.”

In Fascination, UNPA chief Thanawat Amnajanan said that the theme of these stamps will be intangible cultural heritage.

The UNPA will promote World Mental Health Day on Oct. 10 with a stamp issue and souvenir card. The UNPA reports that the denominations for this stamp issue are to be determined.

Supported by the World Health Organization, World Mental Health Day has been observed on Oct. 10 since 1992.

Following the first issue in 2020, a second set of three Crypto souvenir sheets of one stamp each are to be issued Nov. 4. Crypto refers to cryptocurrency, a form of currency that only exists digitally. The denominations for these sheets are to be determined.

Concluding the 2022 program will be a pane of 10 $1.30 stamps with labels to be issued Nov. 18. These stamps will commemorate the 70th anniversary of guided tours at U.N. headquarters.

The U.N. website says that guided tours are “offered in all six official languages of the United Nations (Arabic, Chinese, English, French, Russian, Spanish), as well as in additional languages in high demand” and last about one hour.

Booking information for a guided tour can be found on the U.N. website.

This 2022 program is tentative and subject to change.