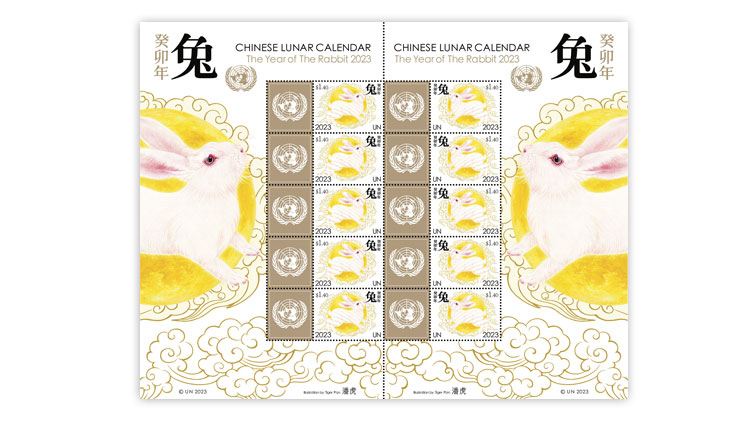 The 2023 United Nations stamp program will begin Jan. 14 with a pane of 10 stamps celebrating the Year of the Rabbit.

The United Nations Postal Administration revealed its 2023 stamp program in its bulletin for collectors, Fascination (issue No. 139).

UNPA chief Thanawat Amnajanan outlined some of the 2023 subjects in a statement at the beginning of the bulletin.

“Looking ahead to 2023,” he said, “UNPA will continue its very popular Endangered Species stamp issue, celebrating the fiftieth anniversary of CITES [Convention on International Trade in Endangered Species of Wild Fauna and Flora]. In addition, UNPA will celebrate World Art Day, World Oceans Day, World Mental Health Day and many others.”

The program will begin Jan. 14 with a pane of 10 stamps celebrating the Year of the Rabbit. The $1.40 stamps for use at the post office at U.N. headquarters in New York City mark the 13th pane in UNPA’s Chinese Lunar Calendar series.

On March 3, the UNPA will issue stamps in its Endangered Species series. This long-running series began in 1993. The stamps will be in three panes of 16 with four designs per pane.

The March 3 set will include $1.40 stamps for use from the post office at U.N. headquarters in New York City; 1.50-franc stamps for the Palais des Nations in Geneva, Switzerland; and €1.20 stamps for the Vienna International Center in Vienna, Austria.

The UNPA will issue a pane of three stamps ($1.40, 2fr and €1.90) to commemorate the fifth United Nations Conference on the Least Developed Countries on March 5, the opening day of the conference in Doha, Qatar.

“The world’s Least Developed Countries are in a race to deliver crucial global development goals by 2030,” the United Nations said. “This new decade needs to usher in a new global partnership to secure a better future for the world’s most vulnerable nations.”

“Each year, on 15 April, World Art Day celebrations help reinforce the links between artistic creations and society, encourage greater awareness of the diversity of artistic expressions and highlight the contribution of artists to sustainable development,” UNESCO said. “It is also an occasion to shine a light on arts education in schools, as culture can pave the way for inclusive and equitable education.”

A pane of 10 1.50fr for the U.N. post office in Geneva will commemorate International Tea Day on May 21.

The United Nations adopted May 21 as International Tea Day in 2019 to promote sustainable production and consumption of tea, as well as to raise awareness of tea’s importance in fighting hunger and poverty, according to the United Nations.

“The tea industry is a main source of income and export revenues for some of the poorest countries and, as a labour-intensive sector, provides jobs, especially in remote and economically disadvantaged areas,” the United Nations said. “Tea can play a significant role in rural development, poverty reduction and food security in developing countries, being one of the most important cash crops.”

The website said that the United Nations officially adopted June 8 as World Ocean Day in 2008 after a four-year on-site and online petition drive.

On an unspecified day in July, the UNPA will issue a definitive stamp titled “Don’t Choose Extinction” in what the UNPA calls a mini-sheet of one stamp. No other information on this issue is available at this time.

Supported by the World Health Organization, World Mental Health Day has been observed on Oct. 10 since 1992.

Nov. 6 will see a pane of three stamps denominated $1.40, 2fr and €1.90 to mark the United Nations Climate Change Conference.

Berlin hosted the first U.N. Climate Change Conference in 1995. The 2023 conference will be held Nov. 6-17 in Dubai in the United Arab Emirates.

A Nov. 12, 2021, article from the Reuters news agency discusses the reaction of Sheikh Mohammed bin Rashid al-Maktoum, who also serves as prime minister of the United Arab Emirates, on hosting the 28th conference.

“We will put all our capabilities to make the conference a success. The UAE will remain committed to global climate action to protect the planet,” he said.

Concluding the 2023 U.N. program will be a Nov. 10 definitive stamp honoring Marie Curie. The stamp is to be issued in panes of 20 and the denomination is to be determined.

This 2023 program is tentative and subject to change.

Story updated Oct. 19 to remove reference to the International Day of the World’s Indigenous People issue that is not being issued.